LG Launches G2 with 'Learning From You' 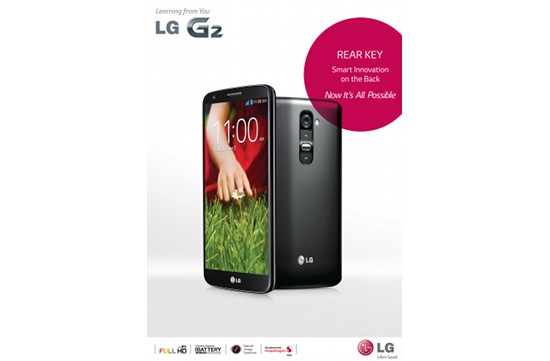 LG Electronics (LG) is unveiling its flagship handset in the UK – LG G2 – with a multi-million pound campaign, planned and bought by Arena.

With the strapline ‘Learning from You’ the campaign highlights the fact that the premium smartphone is based on extensive user insight. It includes features that are inspired by everyday human actions, focusing on function and convenience, and marking a new direction in smartphone design.

Launching on 16 October, the campaign will run across TV, cinema, newsbrands, Out of Home (OOH), digital and social channels. Media will include a partnership with the Telegraph, sponsoring its new Men’s online channel, and interactive Video On Demand (VOD) formats designed to showcase the key features of the phone.

To highlight the G2’s innovative Rear-Key feature, Arena has also planned special media placements, including the backs of buses and a reverse cover wrap of Sport magazine. Other Out of Home (OOH) activity will target consumers at the point of purchase, such as shopping in high streets. HPTOs play a key role in the digital and newsbrands activity to create an impact and convey the key messages of the campaign.

Carolyn Anderson, Head of Marketing at LG, commented: “Our G2 is our most exciting launch yet. This isn’t style over substance – each of its features has been carefully developed and is inspired by the way we interact with our smartphones in day-to-day life. Arena has taken a comprehensive, fully integrated approach to the media surrounding the launch, and has planned a campaign that will reach our consumers at every touchpoint.”

Ed Cox, Managing Partner at Arena, commented: “This is a large-scale, multi-channel campaign that allows the new LG G2 the attention it rightly deserves. As well as developing the exciting media opportunities – such as sponsorship of the new Telegraph Men’s online channel – we’ve had fun with innovative and playful elements highlighting the smartphone’s unique features, such as the back of the bus placements and reverse wraps.”

The launch of the LG G2 in the UK follows its unveiling in New York in August. In the UK the handset will be available from major retailers nationwide, including Carphone Warehouse, EE, Three, and O2.

Key features of the new G2 include:

- A vivid 5.2” FHD IPS Display
- An innovative step-shaped battery to take up as much room as possible for longer life
- An incredible SLR quality camera, DSLRClass 13 MP with Optical Image Stabilisation
- 24bit Audio for rich music playback through the Quadbeat2 headsets
- A rear button for power and volume