Lexus Unveils Its Real-life Hoverboard... And It Looks Absolutely Amazing 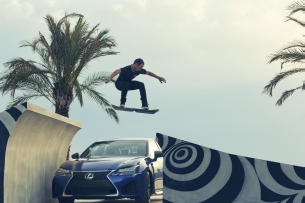 Globally renowned pro-skateboarder Ross McGouran takes centre-stage in the campaign, which shows him teaching himself to float on the hoverboard across a sequence of increasingly challenging stunts.

‘SLIDE’ was created by CHI&Partners and shot by award-winning film director Henry-Alex Rubin through Smuggler, in a custom-built hoverpark which includes unique jumps, ramps, bowls, and even a water feature for the hoverboard to glide over.

“I’ve spent 20 years skateboarding,” McGouran commented, “but without friction, it feels like I’ve had to learn a whole new skill, particularly in the stance and balance in order to ride the hoverboard. It’s a whole new experience.”

CHI&Partners and Lexus began exploring prototypes for a hoverboard more than a year ago, collaborating with a team of scientists specialising in magnetic levitation: IFW Dresden and evico GmbH. Following months of development and testing, the companies have overcome seemingly insurmountable challenges to create the Lexus Hoverboard, which uses a combination of liquid-nitrogen-cooled super-conductors and permanent magnets to float.

Monty Verdi, Creative Director at CHI&Partners, said: “We’re immensely proud of ‘SLIDE’. Both Lexus and CHI&Partners have invested a huge amount of endeavour, determination and courage in this project – and together we’ve overcome enormous production and technical challenges to break new boundaries in science and technology.”

Mark Templin, Executive Vice President at Lexus International said: “Embarking on this project, we set out to push the boundaries of technology, design and innovation to make the impossible possible. With this project we call ‘SLIDE’, we collaborated with partners who share our passion for creating enjoyment out of motion. Even through combining our technology and expertise, we discovered making a hoverboard isn’t an easy process. We’ve experienced the highs and lows and have overcome a few challenges, but through mutual determination we have created a demonstration of our philosophy in design and technology to create Amazing in Motion.”

CHI&Partners CEO Nick Howarth said: “This is arguably Lexus’ most ambitious ‘Amazing in Motion’ project yet, in more ways than one. Not only have CHI&Partners and Lexus collaborated to build an actual hoverboard; ‘SLIDE’ has also taken us far beyond the traditional remits of advertising – bringing together experts in production, PR, content and social media to achieve mass awareness for Lexus through the teaser phase alone.”

Anticipation for ‘SLIDE’ reached peak levels after Lexus released the first teaser film on June 24th, generating more than 3,500 headlines globally in under two weeks. More than a million people voiced their excitement about the Lexus Hoverboard on social media, driving 590m online impressions and 9m views in less than a month.

A debate followed about whether the hoverboard was real, while the skating community speculated about which pro-skater the legs in the teaser might belong to. Lexus  responded with a second announcement on July 15th, confirming suspicions McGouran was the rider. On July 28th, a final trailer was released, announcing the launch date for ‘SLIDE’ as August 5th. ‘SLIDE’ is the fourth project in Lexus International’s multi-award-winning ‘Amazing in Motion’ series created by CHI&Partners*, which aims to illustrate Lexus’ inspired engineering and adventurous spirit – raising widespread awareness and advocacy for the ‘SLIDE’ was created by Brad Woolf and Dan Bailey at CHI&Partners, and overseen by Creative Director Monty Verdi and Executive Creative Director Jonathan Burley.