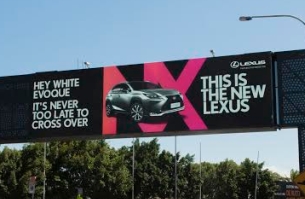 Australia’s most sophisticated and interactive smart billboards go live today in a ground-breaking outdoor extension of the ‘This is the New Lexus’ campaign via M&C Saatchi in a collaboration with APN Outdoor and TMS.

The ‘This is the New Lexus’ brand positioning was unveiled in October with the launch of the NX Crossover model, taking the prestige car marque to a much broader, younger, more progressive luxury audience.

In an unrivalled execution anywhere in the world, the billboards identify the brand, model and colour of passing vehicles to trigger a personal and playful message to drivers via the digital display, such as “Hey white Audi driver, it’s time to Crossover. This is the New Lexus NX.” 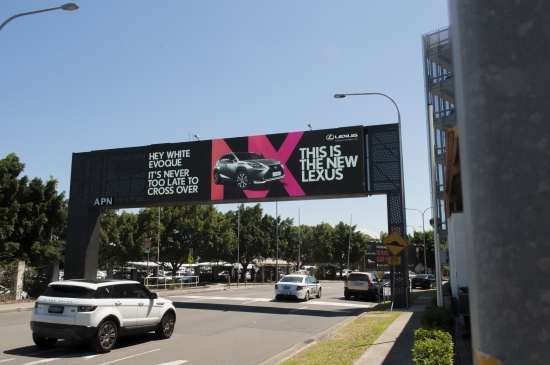 The format also tailors tactical messages based on other variables such as time of day, weather and traffic conditions to generate messages such as: “Hey black Merc driver, the heavens have opened. This is the new Lexus NX.”

The activation features more than 80 different configurations of dynamic messaging in each of the five sites.

Each billboard has a series of cameras on high rotation that capture all passing traffic. The images are sent to the APN Outdoor Classifier, a bespoke, hi-tech device that matches them to its large database of vehicles makes, models and colours in addition to the other variables.

Lexus Australia Corporate Manager – Sales and Operations Adrian Weimers said: “Smart out-of-home aligns perfectly to our new messaging. Our job doesn't simply start with telling everyone ‘This is the New Lexus’, it's also about how we say it.  Using innovative technology such as this activation helps us to further reinforce that there is a change at Lexus.”

APN Outdoor CEO Richard Herring said: “As the leaders in digital outdoor, we are very proud to be collaborating on such a creative execution. This campaign is an excellent example of the opportunities available to advertisers via our Elite Screen network and the market can continue to expect more cutting-edge executions like this from us in 2015.”

TMS Head of Investment Luke Hutchinson said: “This was a dynamic new approach for Lexus brand messaging and media-channel innovation.”

“It’s quite epic to have a 42 square metre billboard having a chat to you as you drive past. It was an ambitious idea that Lexus really went for, brilliantly brought to life by APN Outdoor and TMS.”