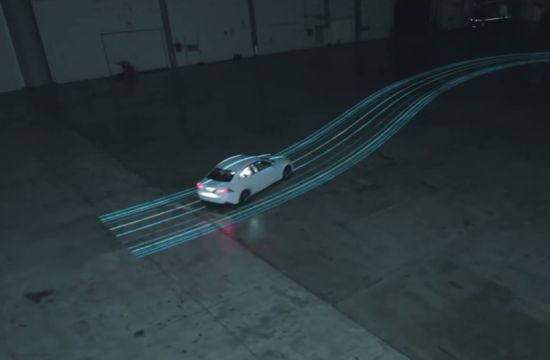 “Trace Your Road” pitted Trulli against a series of improvised racetracks, each one designed on a touch tablet in real-time by one of ten lucky contest winners. Fake Love conceptualized and produced the generative visuals, projections and interactivity for the campaign. LOGAN directed the live action portion, and handled post VFX and finishing. Movie Magic International provided on-site pre-production and production for the spots and produced a behind-the-scenes documentary.

The live event took place amidst high security inside the immense aircraft hangar near Rome. The new IS Hybrid, a multitude of cameras, and vast real-time projections were all brought together creatively by LOGAN live action director, Alan Bibby.

The ten finalists - selected from hundreds of applicants on Lexus’ Facebook page – were given the opportunity to sit in the passenger seat of the IS Hybrid with Trulli at the wheel. The course was then traced by contestants on a touch tablet that projected their designs onto the floor of the hangar using a collection of 12-20K and 22K projectors. The Lexus IS Hybrid was tracked using a custom high-res infrared (IR) camera system.

Trulli’s expert driving skills were put to the test as he attempted to follow the spontaneous, real-time paths. Penalties were assessed for leaving the projected routes and for touching the walls of the hangar. The results included spectacular hairpin turns, stunning footage and, luckily, no accidents.

“The new Lexus IS Hybrid is a real turning point in terms of design and performance,” says Andrea Carlucci, Toyota Marketing and Lexus Director in Italy. “It is unmatched in both areas, and it’s a hybrid, which distinctly differentiates the brand from all competitors. The ‘Trace Your Road’ campaign and experiential event are spectacular examples of how unique this car is.”

The collected footage was assembled into “Trace Your Road” a broadcast commercial campaign created by Saatchi & Saatchi Italy and featuring :15, :30, :60 and 1:20 commercial spots, along with a behind-the-scenes documentary, produced by Movie Magic and Directed by Logan’s Alan Bibby with App design/generative visuals by Fake Love.