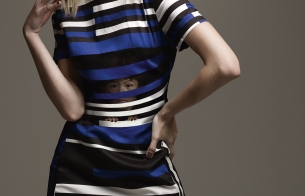 Save the Children is launching international campaign against child labour in the fashion industry starring top model Carol Ribeiro.

The campaign images were inspired by the glamorous editorials created for high fashion brands, but when you look closely, you can see that within each garment, a child is imprisoned inside. The idea is less about criticizing the fashion world, and more about making people realize that these child labour crimes are closer to the consumer than they might think.

Ribeiro was photographed by Jacques Dequeke, but also photographers such as Henrique Gendre, Gil Inoue, Jairo Goldflus e Daniel Klajmic, whose names are frequently associated with the front covers of fashion magazines, took part in the campaign.

The campaign also has a social element, inviting instagram users to post positive fashion-forward images with the hashtag #dress4good, helping to spread the impact of this message.