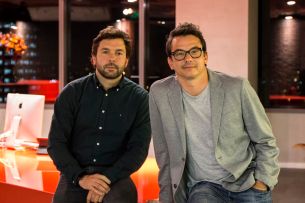 Felipe Luchi, CCO of Lew'Lara\TBWA, has been named the agency's newest partner, along with Luiz Lara, Márcio Oliveira, and Sheila Wakswaser. The head of the creative team since October 2013, Luchi is becoming a part of the roster of partners thanks to the excellent results obtained in recent months, including the two Lions at Cannes – Braille Bricks and the Front Page Pack – and the fantastic performances of the campaigns for Gatorade and Nissan for the Olympics, La Creme for Cacau Show, and Maturatta and Academia de Carnes (Meat Academy) for Friboi.

In addition to the Lions, the projects created for the Dorina Nowill Foundation (Braille Bricks) and Café Pelé ("Front Page Pack") were also winners of the Estadão Cannes Challenge Award. Luchi explains, "We made changes to the team and the design of the creative team. It's not enough to just improve the final work in traditional disciplines. We also improved the digital and social spheres to make the work more current and give it a wider reach”.

The CCO also emphasises the partnership with the CEO of Lew'Lara\TBWA, Márcio Oliveira: "Márcio is one of the best partners I've ever worked with.  It is a refined, streamlined, and complementary exchange."

One of the most award-winning creative professionals in the country, Luchi has been invited to chair the juries of important national and international creative festivals in 2016. At the 2016 El Ojo Festival, he will serve as the chairman of the jury in the Design and Graphic Production categories. At the LIAF (Lisbon International Advertising Festival), he will be a juror in the Film category, and at the CCSP (São Paulo Creative Club) Festival, he will sit on the jury in the Education and Culture/Commerce/Restaurants, Fast Food and Cafeterias/Telecommunications categories.

Says Márcio Oliveira, "Luchi's entry as a partner of the agency is more than deserved. He has been impressing a different dynamic on the Creative team. An example is the work for Nissan. The internet has greatly impacted the automotive market, and our Creative team, led by Luchi, is overcoming these challenges with ambitious, disruptive work”.