Letters of Gallipoli: GPY&R and Finch Team Up for ANZAC Day Webisode Series 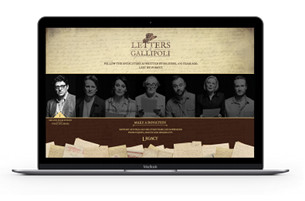 To commemorate ANZAC Day, Legacy and GPY&R Melbourne and Finch have created 'Letters of Gallipoli', a seven-part webisode series.

Working with the Australian War Memorial, GPY&R researched the letters and diary entries written by Australians while they were aboard ships, fighting in the trenches and wounded in hospital beds.

The project uniquely documents the events as they happened over a century ago, through the very personal accounts of soldiers and nurses writing to their loved ones.

The letters are read by prominent Australian actors and personalities, including Vince Colosimo, Damon Herriman, Diana Glenn, John Howard, Gyton Grantley, Ita Buttrose and Josh Lawson. One hundred years after they were written, the films will be released each day at lettersofgallipoli.com, in the lead up to Anzac Day.

JamesWills, copywriter at GPY&R, said: “What’s wonderful is that some of Australia’s best talent and production crew have donated their time to help create this unique series for a great cause. What you see on film are actors reading these amazing letters for the first time. Included in the series is a diary entry from my own great-grandfather, so it’s a project I’m proud to have been part of.”

Tony Ralph, National Chairman of Legacy Australia added: “Projects like Letters from Gallipoli are important to remind the community why Legacy is here and needs support. We have been caring for the families of deceased veterans and those who have given their health for 93 years. We currently care for over 80,000 widows and partners and many hundreds of children. As long as we send Australian men and women into harm’s way there will always be a need forLegacy.”

Time donated by cast and crew.