Trends and Insight 537 Add to collection 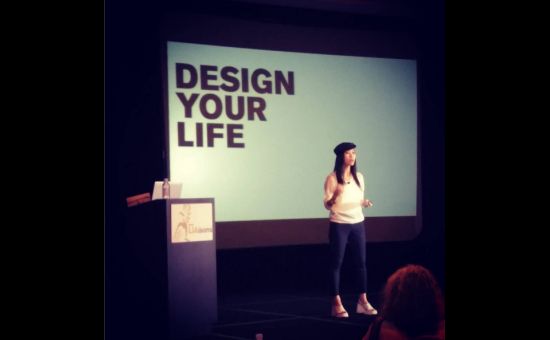 “The way a lot of people think about balancing work and life is to separate them, but for me it’s about integrating them and making them fun.” Design Army’s Pum Lefebure’s many talents cover graphics, fashion design and directing – and it turns out she’s pretty good at general life advice too.

She was in Las Vegas last week, talking at the London International Awards’ Creative LIAisons event, and shared some fascinating insights into how she has gone about shaping her career and developing her business and building a reputation as one of the most creative master craftswomen in design.

The philosophy that’s allowed her to flourish is one which she, unsurprisingly as a designer, describes in a vividly visio-spatial fashion. The key, she explains, is to visualise your goal or ambition not as something out-of-reach, high above you that you strive to reach for but to put it at the base of everything you do. To illustrate this, she says, she builds a box every year. On the top of her box is her priority (in this case, it’s her health: “As creative industries we are so bad, we work such long hours. We don’t have time to exercise, we don’t have time to see friends or loved ones, we eat like crap. Be careful about your health, it’s really important to you. It will help you go further.”), on two sides she writes two things that make her happy in her personal life, and on the other two she notes two things that make her happy professionally. Her ultimate ambition, or goal, goes on the very underside of the box. It’s an exercise she encourages everyone to try – and I leave the session with my very own flat-packed cardboard box.

“The secret is to make the goal the foundation of everything you do,” she says.

The box also brings together elements of her personal life and work life – that idea of integration is key to her approach. Design Army was co-founded with her husband Jake and she tries to bring her young daughter on shoots, where she can.

It helps, of course, that in her work she does something that she truly loves. “Design is my religion, but as a print graphic designer I don’t stop there,” she says. Indeed after designing her own house she now finds that clients want to consult with her on their own interior spaces. What’s more, she’s been able to re-visit her long held dreams of fashion design (an ambition she abandoned as a young woman in her native Thailand when she discovered that she was ‘hopeless’ with sewing) and has recently launched her own swimwear line in collaboration with Karla Colletto.

The idea that design is Pum’s personal religion is very much apparent in the work she’s done. Whether it’s the vivid costume design and dynamic print and video work she’s done with one of her longest-standing clients, the Washington Ballet, or the new Wes Anderson-esque fashion film she recently made for Georgetown Optician, Pum’s creative flair comes hand-in-hand with a sense of careful, aesthetic precision.

That veneration of craft is something she hopes to pass on to the young creatives at the Creative LIAisons. She’s also been judging on the London International Awards Design and Package Design jury and she’s noticed that in advertising, particularly, that attention to detail isn’t always as strong as it could be. “I was judging last week on design and what I’ve found in advertising is that there’s so many great ideas with beautiful copy that fall short on the typography. There’s a lot of things that need to be turned round right away but don’t lose that craft,” she says.

Another important element in Pum’s life-work philosophy is the idea of ‘giving back’. When her client, the Washington Ballet, was faced with the prospect of cutting its scholarships to young people from low-income backgrounds, she knew she had to do something. She created a commemorative book, Wonderland, and managed to raise $250,000 for the ballet’s education programme.

“I personally cannot write a cheque for 250000 but I can use my talent to help those kids from low income background with talent and get them off the street,” she says. “Your talent can go so much further than selling toupees or a bottle of soda.”

Pum also has advice for ambitious creatives hoping to set up their own businesses some day – self-marketing and getting on the awards circuit as soon as you can are great ways to raise your profile and get in front of the kids of clients you really want to work with.

“Become a master at self-branding – this is a tough one because it’s hard to talk about yourself but as a business owner and entrepreneur I’ve come to the conclusion that, if I can’t brand myself how can I convince clients that I can brand them?” she says, explaining that it’s been a real challenge to develop the skills to speak at events and on TV but that she made the decision very early on in her career that she would ‘turn her biggest weaknesses into her biggest strengths’.

As for award shows, she says that in the early days Design Army was incredibly pro-active about entering awards. “And then you start winning, and once you start winning you get asked to judge, and then the bigger shows ask you to judge,” she says, explaining the virtuous cycle. “If I go to judge a big show, I come back reall really energised because I’m seeing the best of the best. And then I give my time back to things like this [CreativeLIAisons] and share my story with young people.”

But Pum also has a word of warning for young would-be agency founders – be very selective about the clients you bring on, even if that means that you don’t make as much money as perhaps you could in the early years.

“I love what I do because I do what I love. A lot of times we’ve even had big pharmaceutical companies approach us to do branding, for lots of money but I know it won’t be fun and it won’t take me towards my fashion design goal. If I do a Viagra project, next thing you know you’ve more and more big corporate drug companies coming to you,” she says.

“The client you choose today is going to set the foundation for the clients you get tomorrow. Don’t be a whore.”

Pum’s approach to life and work is very much about thinking about what you want to achieve and taking control, rather than being swept along by circumstance or deciding to do things for all the wrong reasons. And given everything she says about the importance of design, to her it’s hardly surprising that she casts her well-honed designer’s eye over her fate.

“Dreams don’t work unless you do. You need to take charge of your own destiny, you need to design your life so you can really kick ass!”