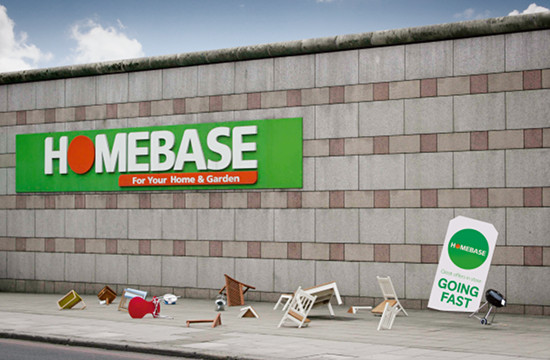 Homebase chairs, benches and lamps appear to sink into the ground in a new ambient campaign by Leo Burnett to promote the nationwide Homebase in-store offers.

Specific items were made to look like they were disappearing into the pavement, in a first of its kind installation, which was placed around the Homebase store in Wandsworth last weekend (26th – 28st April), as part of the ‘Going Fast’ campaign.

Signage around the installation and product tags attached to each item encourages passers-by to be quick, as the in-store offers are “going fast”.

“It’s nice to do something different to catch the eye of passers by – we had some really positive feedback from customers who liked the clever idea. It was really impactful and interesting.” Commented Michelle Raeburn, Local Marketing Manager, Homebase.

The campaign, targeting commuters and weekend shoppers, created a buzz around the store in a new and original way, allowing flexibility and opportunity for roll-out across other stores moving forward.