Awards and Events 975 1 Add to collection 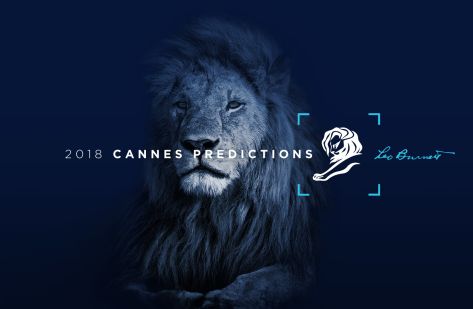 The annual Leo Burnett Cannes Predictions has a track record of nearly 85 percent accuracy in predicting campaigns with a strong likelihood of winning a coveted Lion. The list is curated by Leo Burnett Worldwide Executive Chairman & Global Chief Creative Officer, Mark Tutssel. Tutssel will return as a Cannes Lions jury president for the fifth time this year, presiding over the inaugural jury for the newly created Sustainable Development Goals Lions.

“It’s an exciting year of change at Cannes, with newly simplified award tracks which will allow us to be more focused than ever on recognising bold creativity,” said Tutssel. “As the industry shifts beneath our feet, it’s important that we pause to acknowledge the truly innovative ideas and brilliant people who are creating work that drives impactful business results and, in some cases, contributes to the betterment of humankind.”

The Cannes Predictions list is a compilation of a year-long evaluation of brand work that reflects global trends fuelling the industry. This year, the following five trends shone:

Epic never goes out of fashion. Look no further than blockbusters like Nike’s 'Nothing Beats a Londoner' or P&G Tide’s 'It’s a Tide Ad,' both strong contenders for Film Lions. Each brilliantly executed, they each also seamlessly stitched together small stories into narratives that made a seismic cultural impact.

Shot on 16mm film to capture the essence of the city, Nike’s 'Nothing Beats a Londoner' cast more than 250 real-life residents, including star athletes and celebs, for a whirlwind tour of the travails of sporty Londoners.

P&G's Tide won the Super Bowl this year, with its self-referential collection of ads that all turned out, hilariously, for Tide. More than a dozen spots were crammed into four breaks that helped vault #TideAd to the highest-trending hashtag besides the game itself.

The emotion of human storytelling and the timeless potency of meaningful moments captured on film is thriving across this year’s collection. Conversations between children and parents are the subject of two favourites: one presents a small slice of life, the other a more difficult dialogue.

Cadbury’s 'Mum’s Birthday' stars a young girl who hopes to buy a bar of chocolate for her mother. At the corner store, she’s only able to offer the assorted contents of her pockets as payment, but is treated to a warm act of kindness in return.

In 'The Talk' from P&G, we see black parents through the ages having that painful discussion with their children about growing up in a country that doesn’t treat everyone equally. It’s a poignant film and a powerful message, made even more so by the fact the film refrains from showing any products.

In Audi’s 'Clowns,' a troupe of merrymakers wreaks havoc on the road in various ways. Despite the hazards they throw at the drivers, the technology in their Audi vehicles deftly outmanoeuvre the antics, proving the brand is 'Clown proof.'

In 'Welcome Home,' the expansive sound of Apple’s HomePod speaker is brought to life through a spectacular performance by singer-songwriter and dancer FKA Twigs and impeccable direction by the inimitable Spike Jonze. Arriving home after a dreary day, she cues a song and the interior of her home becomes a variegated, shape-shifting wonderland. Remarkably, the film was shot using very few CGI effects, relying on sophisticated hydraulics that moved the set.

Agility has never been as critical to modern marketers, and this year’s collection of work demonstrates that brands are keeping pace by seizing real-time moments, tapping into culture and exploiting tactical opportunities like never before.

From Orange Telecom’s 'Now or Never,' which seizes upon World Cup fever and the national Egyptian team’s long drought, to Burger King tapping our collective fear of clowns for its 'Scary Clown Night' promotional effort, brands win when they’re moving at the speed of culture.

Two other favourites uniquely parlayed problems into advantages. KFC could be the first piece of crisis communications to win a coveted Lion thanks to its brilliantly crafted 'FCK' response to having run out of chicken across the UK. Downtown Records exploited a technological hiccup with Facebook Live to create an ingeniously simple and hypnotic music video for indie band The Academic in 'Live Looper.' 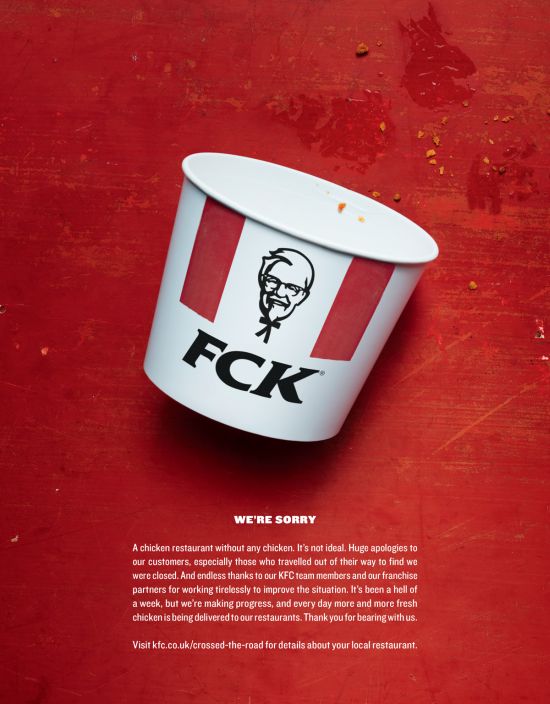 The industry’s pervasive push toward personalisation manifests in a number of ways this year. From technology that empowers people (and their pets) to take the perfect picture, to a sombre effort that puts the faces of real victims of the opioid crisis, we’re seeing more work that makes an impact through the spontaneous and the personal.

Snaptivity’s 'Snaptivity App' leveraged AI-enabled camera infrastructure placed in stadiums to deliver one-of-a-kind photos to fans, captured at key moments in soccer matches. In New Zealand, Pedigree stepped into the mobile accessories business with the 'Pedigree SelfieSTIX,' a device intended to hold a dog snack in order to capture pooch’s attention for the perfect selfie.

The National Safety Council’s 'Prescribed to Death' featured 3D images of each of the 22 thousand people who’ve died from prescription overdoses in the US intricately carved onto individual pills that were presented as a sombre exhibition. The installation put a human face to an epidemic in a truly unforgettable way.

Finally, Skittles took personalisation to new heights with its Super Bowl stunt, 'Exclusive The Rainbow.' Three weeks before the Super Bowl, the brand announced it would be customising — and then screening — its spot for just one person, Marcos Menendez. Everyone else could tune into a Facebook Live broadcast at halftime in which viewers could watch Marcos’ reaction, but not the actual ad, which nevertheless has become Skittles’ most talked-about in its history.