Alongside Amnesty Internation, Leo Burnett Urge Rail Passengers to "Help Get Them Home" 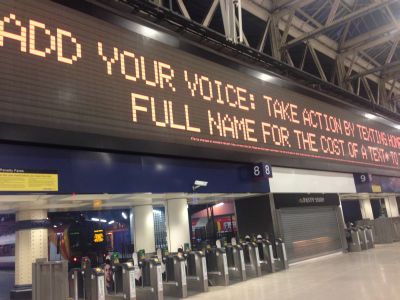 Thousands of rail passengers were invited to “Help Get Them Home” as a list of prisoners of conscience – people arrested for peacefully expressing their views -  appeared at Waterloo station, with details of how passengers can text to help secure the prisoners’ release displayed on the world’s biggest departure board.

On Mother’s Day weekend, Britain’s busiest rail station was busier than usual. The giant screens, which span six platforms, were given over to Amnesty. As people text to add their support for the campaign, their names were displayed on the huge screens.

The Amnesty “departure boards” campaign, created by Leo Burnett, with media provided by JCDecaux, show details of seven individuals who are imprisoned and have been subject to torture and the date of their “departure” or when they were forcibly taken. Departures include:

Tibetan film-maker awaiting trial for "inciting separatism". He has been detained since 2008 for his involvement in making a documentary film about Tibetan attitudes towards the Beijing Olympics and the Dalai Lama. He was beaten in detention and is held without charge or trial. Amnesty considers him a prisoner of conscience.

Journalist arrested in 2006 at the offices of his newspaper, the Daily Observer. He was detained by plainclothes police officers thought to have been from the National Intelligence Agency, who have subsequently denied any involvement in his arrest or continued incommunicado detention. Amnesty International considers him to be a prisoner of conscience.

Has been held incommunicado without charge or trial since 2001. She was arrested while sleeping in her bed, during a round-up of political dissidents, known as the G-15/Group of 15, which included her former husband, then Vice-President of Eritrea, Mahmoud Ahmed. Amnesty International considers her to be a prisoner of conscience.

Russian activist who criticised the environmental impact of the recent Sochi Winter Olympics and was jailed for three years for spray-painting a fence as part of an environmental protest. Amnesty International considers him to be a prisoner of conscience.

Amnesty International’s UK Director Kate Allen, said: “It’s great to have the world’s largest departure board to tell these stories - but we’re not keen on departures, we want to facilitate arrivals”.

“The message is simple: on your way home, help get them home.  These people have been missing from their homes – some of them for years.”