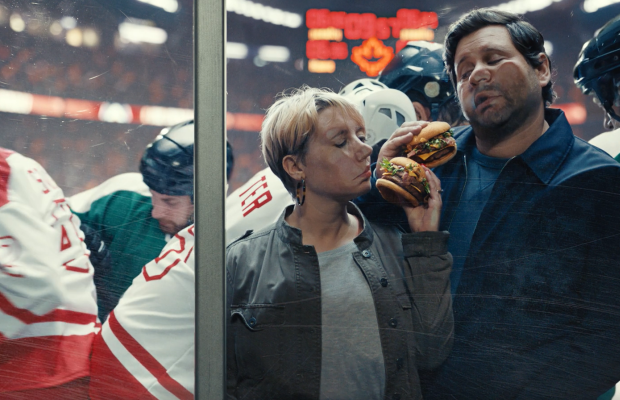 McDonald’s have launched Great Tastes of the World for the seventh year. Created by Leo Burnett London, the latest addition to a series of films is The Canadian Stack.

Building upon the success of the previous six years, Great Tastes of the World encourages McDonald’s customers to flirt with adventure through a range of delicious burgers inspired by ingredients and flavours from around the world.

As part of the ‘Great Tastes of the World’ campaign, a series of TV spots use arresting visuals to show how the exotic flavours of these limited-edition burgers can transport customers from humdrum everyday routine, to exciting new international locales. This juxtaposition is brought to life in a series of humorous films from director Harold Einstein with clever use of match cuts to show the disparity between the two contrasting environments.

The hero burgers will change fortnightly and include flavours such as Jamaican Chicken, the Italian Stack and the Indian Chicken. This week (7-11 October) sees the launch of the Canadian Stack, which runs across TV, outdoor, press, VOD and social.

Peter Heyes Creative Director at Leo Burnett said: “Great Tastes of the World provides a brilliant opportunity for McDonald’s to grab the attention of the nation while stretching its legs creatively. Every year builds on that last, and we’re all super proud of where we have got to this year.”

You can check out the latest spot below:

Title: Great Taste of the World