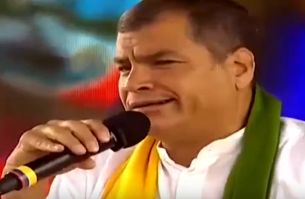 Ecuador is known to have strict media laws on censorship and free speech, and Ecuadorians primarily get their news from a 4-5 hour weekly broadcast hosted by President Rafael Correa, making him the only voice of information and news. John Oliver even did a sketch in February on President Correa drawing awareness to the President Correa’s practices and strict media laws.

With media underdogs 4pelagataos & Leo Burnett Mexico's MashiMachine, people can type any phrase they want into the platform and it will use those keywords to produce a mashup of existing Correa video clips (reminiscent of the Talk Obama To Me platform developed by Ed King). The platform contains 10,000 Spanish words and numerous aggregated clips of Correa. In order to keep the videos from becoming immediately traceable, the platform creates a microsite each time a user creates a video. Users can then promote their videos across Facebook, Twitter and Whatsapp.

Since its April 30th launch, MashiMachine has gone viral. Over 137,000 videos have been created and #mashimachine was Twitter’s number one trending topic before the Ecuadorian government took the hashtag down. The platform has created so much backlash that after the first week of launch, President Correa missed his weekly scheduled broadcast and the Vice President had to take his place.