Agency brings a pop-up drive in that could appear anywhere 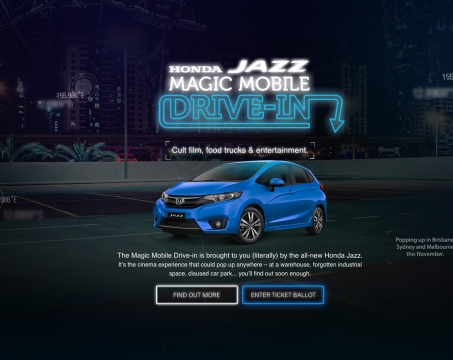 The Honda Jazz is a small car with one big difference: the ability to carry an amount of cargo that defies its size, made possible by its adaptable Magic Seats.

So Leo Burnett Melbourne has created the Honda Jazz Magic Mobile Drive-In - an outdoor movie event that could pop up anywhere, courtesy of the generous versatility of the Honda Jazz.

The screen, projector, generator, lights, even the beanbags and the candy bar will emerge from a team of Honda Jazz vehicles, in front of the captive audience. And unlike an average drive-in, the Magic Mobile Drive-In could pop up anywhere.

Says Andrew Woodhead, Creative Director of Leo Burnett Melbourne: “The Mobile Drive-In is an experiential event and a product demonstration in one.” A ballot system will be used to allocate tickets here. Entrants can also share the event for a chance to upgrade their tickets to VIP, allowing them to watch the film from inside a Honda Jazz in the front row of the drive-in, effectively creating a ‘test-drive-in’. A few days before each event, successful ballot winners will receive tickets, locations and directions via mobile.

Says Jason Miller, General Manager – Communications & Customer Honda Australia: “This Honda Jazz activation sits perfectly within our brand platform of clever thinking. The Magic Mobile Drive-In is as much about engaging and entertaining our audience as it is about selling cars persé. It’s important we connect with the next generation of buyers to ensure we shift current perceptions.”

The Honda Jazz Magic Mobile Drive-In activation will begin in November and runs off the back of the national launch of the Jazz. It will be supported by television, direct, online, mobile and social.