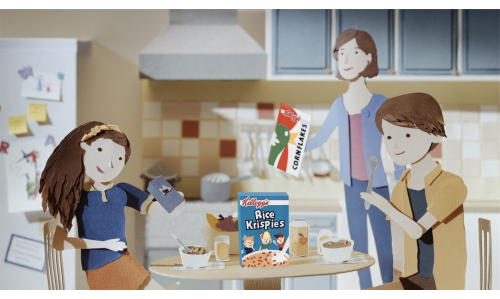 Kellogg is launching its first ever ‘master brand’ campaign in the UK, beginning with a new TVC designed to communicate the quality of its food credentials and remind people that every bowl of Kellogg’s cereal starts with sunshine and natural grains, many of which are nurtured, grown and harvested close to home.

Created by Leo Burnett London working with director Yves Geleyn, famous for the most recent John Lewis Christmas ad campaign ‘Bear and Hare’, the ‘Storybook’ TVC uses the motif of a children’s pop-up book to take the viewer on the ‘seed to spoon’ story and demonstrate the wholesome goodness inside every box of Kellogg cereal.

Told in reverse, the TVC opens with a family enjoying breakfast and then ending with a grain being sown in a farm.  The creative concept uses paper cut illustration, created with paper artist and engineer Mandy Smith, and utilises both classic 2D animation along with innovative current day methods.

Vikki Brunning, marketing manager at Kellogg’s, said: “Our founder W.K. Kellogg introduced breakfast cereal to the world with just a simple flake of toasted corn.  More than 100 years later, every bowl of Kellogg cereal still starts with natural wholegrains, many of which are grown and harvested close to the factories where we make our foods.

“The “Storybook” TVC is the first milestone on our journey to remind people about the origins of our cereals while leveraging the strength of the Kellogg brand to reinvigorate the category and reaffirm our position as a leader and trusted authority on breakfast.”

The ‘master brand’ campaign is being driven by a series of long-term operational initiatives within Kellogg Europe to uphold the quality credentials of its breakfast cereals and its longstanding leadership and commitment to hunger relief.

Initiatives include “Origins” which works with farmers across Europe to produce the best quality wholegrains while preserving the natural habitats in which they are grown. “Breakfast for Better Days”, is Kellogg’s hunger relief programme that aims to provide one billion breakfasts by the end of 2016, and “Love Your Cereal”, which forms part of Kellogg’s on-going innovation strategy to provide parents with more choice by identify healthier options for its cereals and snacks.

The communications element of the campaign will continue throughout 2014 and be supported by PR, digital and social media as well as a media partnership with Trinity Mirror and Bauer.