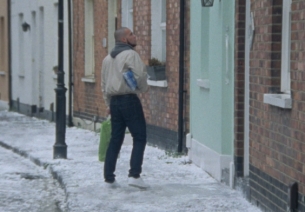 Today The Co-operative Food launches its Christmas TV campaign. The 60-second commercial demonstrates that there is a lot more to The Co-op than just essentials. And the story shows Co-op’s good food as the catalyst to spreading goodwill this Xmas.

The commercial, entitled ‘Ice’, opens with a young man and his flatmate preparing for a Christmas drinks party. But when they realise they’ve run out of ice, the guy pops out to his local Co-op.

As he leaves, the roads and pavements are covered in ice and, as he walks briskly to the store, he spots an old man attempting to leave his house but due to the treacherous conditions the old man decides to stay at home.

The young man’s conscience is pricked and on entering his local Co-op store and seeing all the good food on offer, he decides to buy lots of goodies for his elderly neighbour. The young guy leaves the bag of festive extras anonymously at the old man’s door, before returning home with the ice, finishing with the endline: “Discover a little more this Christmas”

The film will be always broadcast with one of two 10 second tails, featuring the old man and his wife enjoying this random act of kindness.

Ravel’s ‘Bolero’ accompanies the campaign – which was made famous by the ice skating duo Torvill & Dean during their gold medal winning routine at the Sarajevo Winter Olympics in 1984.

The films were shot by Tom Tagholm from Park Pictures. Creatives were Phillip Meyler and Darren Keff from Leo Burnett, creative director was Hugh Todd.

Darren Keff and Phillip Meyler, the creatives behind the campaign said: “This was an opportunity to make a film that would tonally be very different to the other Christmas ads. A story that reflects the unique role Co-op play in local life.”