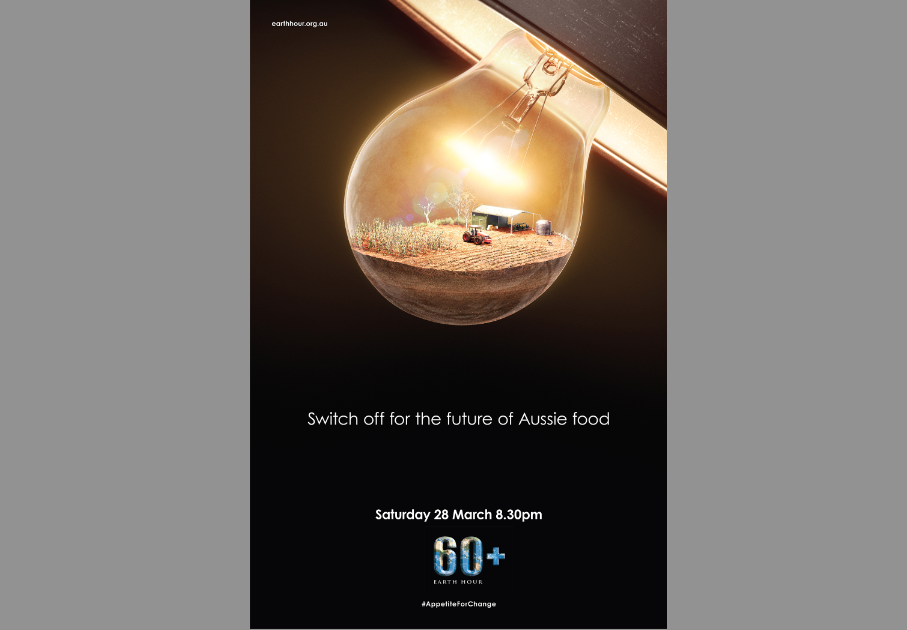 Leo Burnett Sydney has launched an integrated campaign to drive awareness and participation in Earth Hour 2015, encouraging people to turn off their lights and dine in the dark to show their support for the future of Australia’s farms and food supply.

Featuring the tagline ‘switch off for the future of Aussie food’ and the hashtag #AppetiteForChange the campaign broadens the traditional Earth Hour message from energy conservation – turning out lights – to focus on the threat global warming poses to the future of Australian farms and fresh food supplies.

The campaign launched on 1st March and will span TV, digital, radio and outdoor in the lead up to Earth Hour on Saturday 28 March at 8.30pm local time.

Andy DiLallo, chief creative officer Leo Burnett Sydney, said: “Food has the power to bring people together. This campaign taps into that - bringing people together to give their voices and support to the need to protect and preserve the future of Australian food and the farmers who provide it.”

“By encouraging people to ‘dine in the dark’, we can shine a light on the plight our farms – and our country – face. As an agency, we are proud to contribute to help raise and continue conversation and education around this vital issue.”

Anna Rose, head of Earth Hour with WWF Australia, said: “All Australians are proud of our farmers for feeding the nation, but they are on the frontline of rising temperatures and more extreme weather. Flooding, drought, fires and changes in pests and weeds are affecting the farms that supply 93% of the food we eat.”

Earth Hour began in Sydney in 2007 as a project of WWF-Australia to raise awareness of the effects of climate change. The symbolic hour has grown to become the world’s largest grassroots environmental movement celebrated in 162 countries and over 7000 cities in 2014.

All Earth Hour supporters are encouraged to visit www.earthhour.org.au and get active on social media using the hashtag #AppetiteForChange.