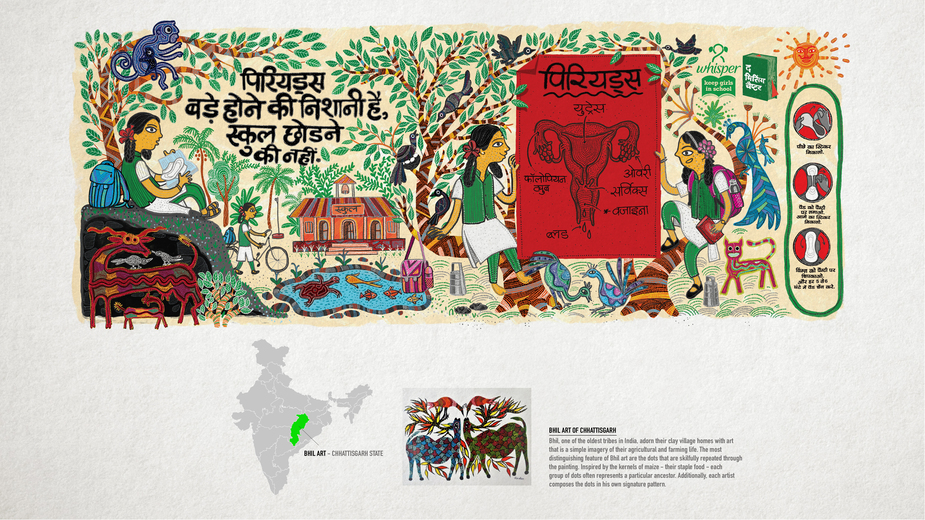 “When I saw blood for the first time, I thought I was dying”. These are words of a 10-year-old girl from a rural village of India who dropped out of school during the onset of puberty. Due to lack of period information a shocking 23 million girls drop out of school after puberty every year. That is almost 1 in every 5 girls in India.

More than 70% girls are unaware that menstruation occurs until they get their first period and even then, the information they receive is often incorrect. In a country mired with deep-rooted cultural restrictions, so much so that even a mother doesn’t talk about period education with her daughter and neither does the school curriculum cover the subject, how does one break the proverbial glass ceiling? The answer to that lies in a systemic change by bringing accurate period information to every girl child through the most traditional platform – school textbooks.

Whisper has imparted period education to more than 40 million schoolgirls, but there’s a long way to go. This is a ‘Missing Chapter’ in their curriculum. To really make a measurable impact and bring about a change at micro level, we decided that if the girls don’t have access to the chapter on period education, we will take the chapter to them. Thus evolved the idea of using one of India’s oldest communication forms – ‘wall-art’ to spread period education by taking this chapter to India’s smallest towns and villages.

After identifying 28 art styles specific to the geography of each state, we worked with local artists to create custom hand-drawn paintings centred around ‘The Missing Chapter’ on periods. Hyper-localized in 28 different languages, slogans with catchy lines were crafted to bust period myths along with a 3-step visual aid on how to use a pad. These paintings have been put up on school and village walls – a place no girl can miss seeing these. The missing chapter explains the simple biology behind periods, how to use a pad and the importance of continuing their school education to girls. All done to help in triggering a much-needed conversation on menstruation to help #KeepGirlsInSchool.

Speaking about the campaign Rajdeepak Das, CEO & chief creative officer – South Asia, Leo Burnett said: “We believe that design and creativity can change human behaviour and this is one of the biggest examples of it. The Missing Chapter that hasn’t reached millions of girls in India will now be made accessible through local art to everyone. Thousands of school and village walls have become a canvas for local artists to talk about one of the most important lessons for girls – period education. A lesson that girls can’t miss. We borrowed from culture to break cultural taboos.”