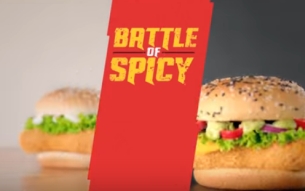 Westlife Development Limited, owner of the Master Franchisee of McDonald’s restaurants in West & South India through its direct subsidiary Hardcastle Restaurants Pvt. Ltd. spiced up its menu with the launch of new Indi McSpicy burgers.

The McSpicy platform has witnessed tremendous success globally and is popular among patrons who experiment with food and are in tune with diverse cuisines & flavours. This festive season, McDonald’s has launched the first of its kind ‘Battle of Spicy’ campaign which enables customers to decide which burger will survive on the menu between the original McSpicy offerings and the new Indi McSpicy Burgers via a National Voting contest. Customers can opt for the Indi McSpicy Paneer or Chicken Burgers, which are enriched with flavourful spices from crown to heel.

Commenting on the launch, Mr. Kedar Teny, Director – Marketing & Digital, McDonald’s India – West & South India said, “We have seen a rising demand from customers for spicy food in various forms, be it on the mains or sides. Our McSpicy range has been extremely popular among patrons and we thought this festive season let’s make it more exciting by challenging the hot selling McSpicy burger with the Indi McSpicy which is inspired by spices and ingredients which are closer to the Indian palate.

To make it even spicier for our customers, we have spiced up our desserts as well and will be offering a Chilly Mango Flurry and SoftServe as a Limited Time Offer during this period. This is a first ever on our most popular dessert pick on our menu. A consumer preference research done by International Journal of Scientific and Research last year notes that 67 per cent of respondents preferred spicy flavour fast food in India reaffirms our belief that Indians likes it Hot & Spicy. Indian customers have a higher affinity towards local spices and the use of robust & full-bodied flavor. Therefore, it will be interesting to see our patrons vote for the survival of their favourite burger as the ‘Battle of Spicy’ heats up!”

RajDeepak Das, Chief Creative Officer, Leo Burnett India, said, “It is an established fact that choosing gives consumers great joy and satisfaction. We used this ladder to create a solid engagement platform for McDonald’s that would have a lasting effect on the minds of consumers. This campaign gives consumers the chance to choose and decide which burger - between McSpicy and Indi McSpicy – shall be on the menu. We took the humour peg and roped in Raghu and Rajiv, India’s most popular twin brothers to deliver the message among McDonald’s lovers across the country.”

McDonald’s has collaborated with Freecharge for giving customers who vote an exciting opportunity to win I-pads and an I-Phone 6. Customers who vote for their favorite McSpicy burger will also receive an assured cashback worth Rs. 50 on Freecharge.