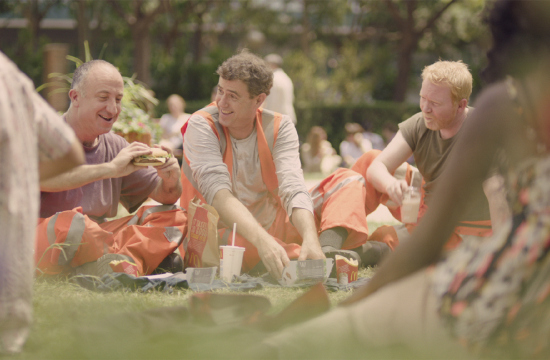 McDonald’s launches a new campaign in support of this year’s promotional Summer Menu, which celebrates all the fun of Summer at McDonald’s.

Created by Leo Burnett, the TV campaign, ‘Sun Party’, turns a truthful lens to familiar British Summer behaviour. Set in a leafy park in a town centre, the sun creeps from behind a building bathing the park in sunshine at which point office workers, students, builders and all others converge on the little sunlit square for an excited impromptu picnic. They eat and socialise together in the warmth with the McDonald’s Summer Menu – the Mediterranean Chicken, Cheddar Deluxe, Mozzarella Dippers, Mixed Chicken ShareBox and Galaxy Chocolate and Galaxy Caramel McFlurry.

However, once the sun vanishes behind another building plunging the park back into shade, everybody disappears just as quickly as they came.