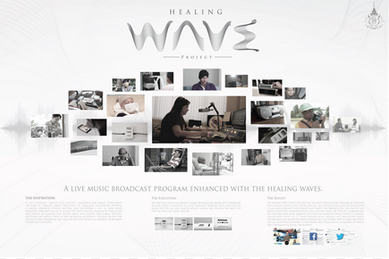 In 2012, Leo Burnett Group Thailand started working with Chulabhron Hospital to help raise funds for cancer patients who could not afford medical help. (Less than two out of ten patients can afford to pay for chemotherapy treatment).

The campaign also aimed to raise public awareness of people struggling to survive as well as raise the spirits of the patients through a message of hope. This resulted in the famous “Hair for Hope” campaign which brought awareness of this message of hope to 97 per cent of Thai people, raised funds that helped 150 patients in need receive treatment and also inspired other cities including Dubai, Incheon and Kuala Lumpur to launch “Hair for Hope” campaign.

In 2015, the agency, together with Chulabhron Hospital, is back to launch a healing device Healing Wave Box as a part of an innovative alternative therapy for cancer patients. Using sound waves and specific frequencies to induce a state of deep relaxation in patients, the Healing Wave Box (which works with all music devices) by Chulabhron Hospital helps to slow down metastasis and the growth of cancer cells.

To further raise the awareness and bring the benefit of the Healing Wave to more people, the agency led the partnership between Chulabhron Hospital and Healthy Life radio 104.5 FM to broadcast therapeutic healing waves to patient across Thailand through a special live radio program Healing Wave Project from April until the end of 2015. Click here to view a promotional video for the program.

To build on the success and awareness from the earlier Hair for Hope campaign, Leo Burnett created a campaign Portrait of Dreams for Chulabhorn Hosiptal’s 2015 fund raising initiative. The agency interviewed four cancer patients - who volunteered to participate in the campaign - with a question.

“What kind of life would you dream about if your cancer was cured?”

The answer to these questions were brought to life in stunning visuals, crafted out of the hair these cancer patients lost during chemotherapy sessions. Their lost hair was distilled into liquid, which was then used as paint by artists to produce unique art pieces. The collection of Dream Portraits are then displayed at a prominent art gallery in Bangkok. The proceeds earned from selling these art pieces were go towards financing chemotherapy treatments for cancer patients in need.