Leo Burnett Fans the Flames of Rugby Rivalry For GIO 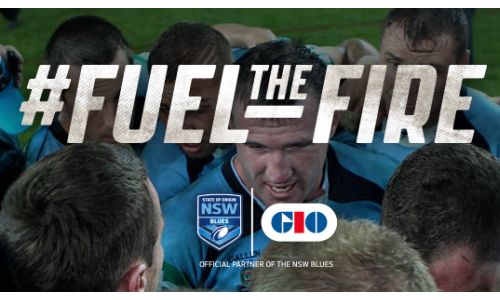 After winning 8 series in a row, Queensland head into this year's State of Origin series with bragging rights, and haven't been quiet about it - especially on social media. In these conversations, it may look like they have NSW at a disadvantage. But the truth is that every word, tweet and putdown that comes from Queensland just makes the Blues hungrier for a win.

As an official partner of NSW Rugby League, GIO has built on this insight in its latest “Fuel the Fire” campaign via Leo Burnett Sydney, which sees the talk that comes from Queensland supporters being leveraged to drive the Blues - the team, the supporters and the entire state - to proudly back their Origin side.

The campaign launches with a video that features a heartfelt letter from NSW fans, thanking Queenslanders for doing their part to help the Blues to victory.

The “Fuel the Fire” launch video went live on Sunday night (18th May), as part of an online campaign across GIO’s Facebook Page, the NSW Rugby League Facebook Page and other social channels, with the dedicated website and campaign hub fuelthefire.com.au and #fuelthefire collating and sharing Origin inspiration. Encouraging online interaction from both New South Wales and Queensland fans, “Fuel the Fire” will continue throughout the 2014 Origin Series with additional videos to be rolled out during this time.

"As a proud supporter of New South Wales, for Origin this year, GIO wanted to get in amongst the fans at a grass roots level. For too long we’ve heard the chatter from Queensland and we’ve found ourselves buying into it and even defending our position. We thought it was time to turn things on their head and just say thank you. Nothing fires up the Blues more than hearing all that Queensland talk, so in a way, Queenslanders have become the Blues’ biggest supporters and motivators," said Mark Condon, Sponsorship Advisor, GIO.

Andy DiLallo, Chief Creative Officer of Leo Burnett Sydney says, "Fuel the Fire gives every Blues fan a reason to stand behind their team with pride. By using the words of real Queensland supporters we have been able to capture the raw emotion and fierce rivalry that only Origin inspires.”