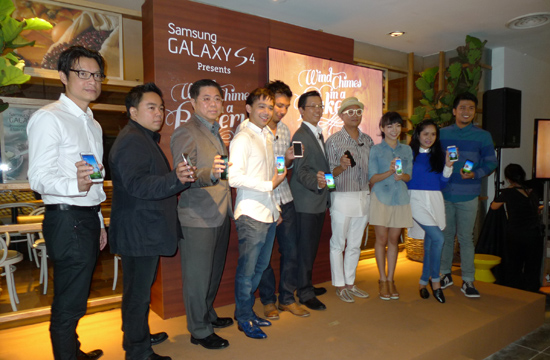 Leo Burnett Malaysia’s “Wind Chimes in a Bakery” has become the country’s first Korean-drama inspired web-series created for the newly-launched Samsung GALAXY S4 in a recent collaboration between Samsung Malaysia Electronics and renowned Korean director, Jang Jae Hyeok.
“We are thrilled that our collaboration with Leo Burnett has resulted in this love story that showcases the features of the GALAXY S4 in such a unique way”, said Vincent Chong, Head of Mobile Phone Division, Samsung Malaysia Electronics.

Eric Cruz, Executive Creative Director, Leo Burnett Malaysia said, "We set out to create a narrative that could extend beyond Malaysian shores. By collaborating with a Korean and Malaysian production team to tell this timeless love story, we created an experience which is not limited to Malaysia, but which is truly Asian.”

“Wind Chimes in a Bakery” is a story about Adam, a boy with nothing but a dream and Sue, a girl with everything but love. It follows Adam as he relives his memories with Sue through a Samsung GALAXY S4 after a tragedy, tying in neatly with the GALAXY S4’s theme and tagline of a “Life Companion”.

Korean dramas have gained significant popularity in Malaysia which is why director Jang Jae Hyeok was engaged for this project. The web-series also features local young stars Koe Yeet and Ahmad Nabil and guest stars Samsung GALAXY S4 Ambassadors, Liyana Jasmay and Awal Ashaari.
Kevin Larken, Associate Creative Director at Leo Burnett adds, "The idea of a Life Companion is a very powerful idea. It is more powerful than a friend or even a lover. It is someone who is with you when you feel alone, that knows you better than you know yourself, and in a sense, completes you. We felt that the only way to tell the story of a Life Companion was to create a timeless love story that is larger than life itself."

"With the GALAXY S4, Samsung has taken smart devices another step closer to a more human experience. Smart Pause, Smart Scroll, Dual Shot, Air View and all the rest. The features all come together to make a device that anticipates what you need and how you want to use it. So we thought: What better way to express the GALAXY S4, a human phone, than with an essentially human story, a love story," Cruz elaborates.

"The GALAXY S4 really was the emotional core for this love story. It reflected both characters and in the end becomes a living testament to their love." Cruz added.

“Wind Chimes in a Bakery” which will be hosted on youtube.com/samsungmalaysia is 8 episodes long. After premiering the first episode on 20 July, and the second episode on 24 July the remaining 6 episodes are being released with the finale being aired on 30 August.

To compliment the TV, this project is also supported with other materials such as print ads, cinema ads, digital billboards and page takeovers.