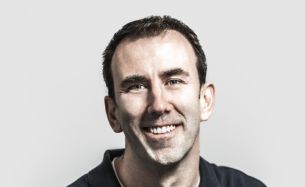 Tom Scharpf was today named Executive Vice President/Executive Creative Director at Leo Burnett Chicago. Scharpf joins the agency from Venables Bell and Partners, where he worked for more than 12 years. He starts in his new position immediately and will report to Britt Nolan, Chief Creative Officer, Leo Burnett Chicago.

“Tom’s reputation as a creative leader is absolutely outstanding. He’s not just able to make amazing work - he has the strategic chops to drive teams beyond clever ads and into true creative solutions,” said Nolan. “The idea of combining Tom’s talent with the scale of our brands makes me super excited.”

Scharpf will be responsible for overseeing the creative product for Samsung, focusing primarily on the mobile and brand work. He and Kieran Ots, who was promoted to EVP/ECD on Samsung earlier this year, will partner to lead the group.

“Samsung is an ambitious brand that has an innate confidence about them, and the ‘Do What You Can’t’ platform has endless potential,” said Scharpf. “I see incredible opportunities for our work with Samsung to impact everyday culture and continue to build momentum and love for this brand.”

Among Scharpf’s most notable accomplishments are his work with Intel and “Look Inside,” Reebok and “Be More Human,” and, most recently, the brand relaunch of Chipotle, which he helped bring into VB&P. While there, Scharpf also helped secure the Audi, SKYY Vodka, Chef Boyardee, Adidas Golf and Google Fiber accounts.

Scharpf began his career at Fallon and was eventually hired as an Associate Creative Director at Venables in 2006. Prior, Scharpf freelanced for agencies including BBH, Chiat/Day, David & Goliath and DDB, among others.

His work has been recognised by The One Show, Communication Arts, The Cannes Lions International Festival of Creativity, Ad Age, Luerzer's Archive and Creativity, and has been named by Adweek's “Ad of the Day” on eight occasions.