Editors' Choice: Hornet Inc's Dan & Jason show the consequences of sharing a bit too much online 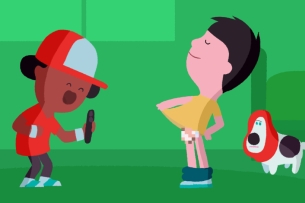 Today the NSPCC is launching a new online safety campaign. Created by Change, Leo Burnett’s specialist arm dedicated to social change. This is their first campaign since winning the business in 2014, ‘Share Aware’ gives parents a range of practical and engaging information and tools to help their children to enjoy the web safely.

The campaign launches with an evocative and entertaining short film, "I Saw Your Willy", that dramatises how quickly things can go wrong when you share things you shouldn’t online. In the film we follow a young boy innocently mucking around with his mate and their smartphones. But a split second decision to share something he shouldn’t creates a snowball effect that follows him wherever he goes.

The consequences are devastating.

The 60 second animated film was written by Leo Burnett’s Liam Bushby and Alison Steven and directed by Dan & Jason of Hornet Inc.

The campaign is supported by an innovative media plan of 10 second TV teaser spots that will launch on Friday 9th January and run across the weekend, inviting the audience to view the full film online.

In addition, a key highlight of the campaign is ‘Net Aware’, no-nonsense online guide to the social networks, sites and apps that children use, featuring ratings from both children and parents and produced in partnership with Mumsnet.

Share Aware is part of a long-term behavioural change campaign for the NSPCC to help address the growing concern of how to keep children safe on the internet . With its simple and memorable call to action, Share Aware is the “Stop Look and Listen” for the YouTube generation.