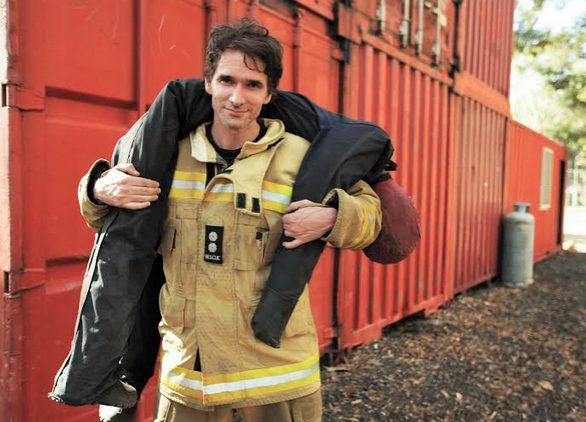 In the dramatic finale of Redesign My Brain 2 tonight at 8:30pm on ABC, Leo Burnett Australia CEO Todd Sampson puts his life on the line in the name of science to prove that brain training works and that fear can be overcome.

Sampson aims to use all his previous brain training and learns to face fear to achieve his ultimate challenge - a skywalk across a 3cm cable suspended between two buildings 21 floors high with minimal training.

To achieve this incredible challenge he starts tightrope training with the help of world-famous skywalker, Nik Wallenda, and a troupe of Australian acrobats.

Neuroscientists have discovered that our brains can overcome hard-wired fears, such as fear of heights, through 'Emersion Therapy' - repeated exposure to scary situations. So Sampson puts himself to the test to develop this resistance.

To learn to overcome fear, Sampson abseils face first down the side of a 21 storey building, but he needs to learn to avoid panicking during his skywalk, so he travels to Boston University where Professor Todd Fachione immerses him in the virtual reality of World Viz to expose him to heights in a safe environment. Next, Sampson needs to hone his decision-making skills under stressful situations and learns to regulate his 'optimism bias', which may cloud his judgement. Thankfully Dr Tali Sharot, a leading expert on the science behind decision-making, is on hand to help.

Sampson then discovers that there's a scientific basis behind mindfulness when he travels to Winston-Salem, North Carolina, to meet Professor Fadel Zeidane, a leading researcher on the subject. Inspired, Sampson heads to Boston's Harvard Medical School for mindfulness mediation training, and with the help of Dr David Vago, a Harvard neuroscientist, and an experienced Zen Buddhist Monk, Sampson learns a new meditation technique.

But has Sampson learnt to manage his fear enough to step off a Sydney skyscraper? In one of the most unforgettable scenes ever filmed in a science series, what happens will take your breath away and could change your life.

The Age has called the finale "...as suspenseful as anything you'll see on TV this year."

The Australian said the skywalk was "...arguably the most challenging and certainly dangerous thing any TV presenter has attempted and almost impossible to watch..."

Make Me Brave, the dramatic finale of this smash hit series, airs Thursday June 11 at 8.30pm on ABC.