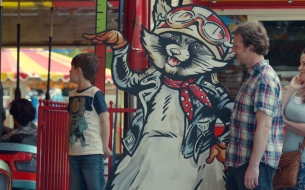 Leo Burnett today unveils the second ad in the new McDonald’s ‘good times’ brand campaign. The campaign celebrates the role the brand plays in customers’ lives and brings to life the brand promise of Simple, Easy Enjoyment. ‘Good times’ is about the little things that make your day easier. It’s about a place where kids can be kids, and families can share a relaxed and enjoyable time together.

The ad, titled ‘Fun’, tells the story of a little boy whose quest for fun is thwarted at every turn. Everywhere he goes his childish enthusiasm for life means he wants to make the most of every opportunity: run on the grass at the football stadium, jump on the beds at the bed store, and jump in a big muddy puddle in his brand new trainers. Unfortunately, however, the world is full of lots of rules and restrictions that mean he can’t have all the fun he wants. Until, that is, his luck takes a turn with a family trip to McDonald’s.