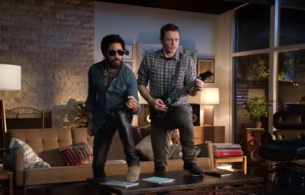 In the newest 90-second trailer for Guitar Hero Live, titled “Win the Crowd,”  from Activision and 72andSunny, Grammy-award winning Lenny Kravitz and Oscar nominee actor and comedian James Franco show off some “Rockstar 101,” as each attempt to school each other on impressing Guitar Hero Live’s real-time responsive crowd. Franco and Kravitz take on the living room as their stage, critiquing each other’s performance as they both vie for the audience’s approval.

Despite his multiple Grammys, Lenny Kravitz ultimately comes up short in his Guitar Hero Live stage performance, and with a booing crowd, asks to 'pause' and start over. But as James Franco teases Kravitz, reminding him that concerts aren’t times to pause or rewind, he then attempts to seize the moment to upstage the rock star, only to be booed and heckled by the audience. With over hundreds of songs to choose from, all players --despite number of Grammys won-- are on equal footing, giving each player a fair chance to rock the house, or more accurately, the living room.

Prior to production, Franco and Kravitz were both fans of Guitar Hero and couldn't wait to get their hands on the new game, which made each others’ in-game performance, and the subsequent joking and wisecracking, authentic and natural. As filming went on, the two got the hang of the game and even added some of their own style to their set.

In the end, Kravitz and Franco put their heads together to come up with a routine that not only wins the crowd, but ultimately breaks the game.

To direct “Win the Crowd,” 72andSunny and Activision recruited Jonathan Krisel, co-creator of Portlandia and a SNL veteran, to capture the hilarity that ensues when a real musician and wanna-be musician feed off of the innovation of Guitar Hero, as it features live crowds reacting to every move.