MADE Fashion Week, MILK, Coco Rocha and Giles Deacon get together for Design Disrupted 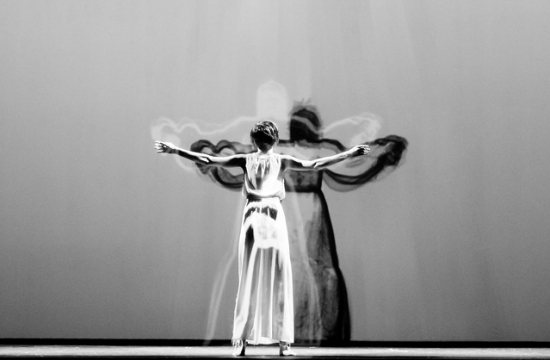 Kicking off MADE Fashion Week, Lexus Design Disrupted brought together the worlds of fashion, art and technology in an event that forecasts and reinvents the future of fashion shows. With the creative vision of directing duo, Radical Friend, LEGS was able to bend space and time to execute the grand scale project.

They fused together holographic technology, avant-garde dance, and 3D projection mappingto create a stunning and magnetic tale. Supermodel Coco Rocha played the heroine in this visual spectacle, which showcased a bold and theatrical retrospective from the archives of designer Giles Deacon. The event completely captivated a fashionable and star-studded audience.

The story unfolded in three acts, tracking Rocha as she battles opposing forces on a path to independence from darkness to light. Through choreographed movement and creative expression, she splits into holographic clones of herself, breaks free from the dark, metaphorical chains that bind her, unleashing a surge of vibrant color as she ultimately finds her own liberation. Filmmaker and artist Andrew Thomas Huang of LEGS served as creative director for the show, which included breathtaking choreography by Ryan Heffington and original compositions by HEALTH.

The fifteen-minute show was intricately timed and coordinated, as Rocha and her dancers performed in front of a backdrop of projection mapping. Musion’s holographic screens overlaid and intersected with the group’s movement, appearing at times to reach out and shatter into the audience. Heffington mapped out a complex routine of trigger points and marks, synchronizing the movement with digital undulations and dramatic cuts and fades. Many elements were interactive and created live on the scene, reacting to Rocha’s movement in a stunning technical display that rendered reality and fiction interchangeable.

“There are so many incredible things happening and being reinvented in the fashion world right now,” said Kirby McClure of Radical Friend. “It gave us inspiration to try something new. With this show we wanted to create a piece that was more narrative and character based, beyond models walking on a cat walk. Our aim was to use holograms, music and dance together in a way that gives you a fully immersive experience.”

“We wanted to transport the audience into a surreal world and a narrative inspired by the beautiful patterns and shapes of Giles' collection,” adds Julia Grigorian of Radical Friend. “We used holograms as a visual tool, a story telling device, and by complimenting them with 3D projected environments, and live dancers it began to feel very new, yet harmonious.”

With the support of Team One, agency of record for Lexus, this prodigious collaboration reflects and reaffirms a shared focus on design and technology, and a willingness to push boundaries. “LEGS’ credo is to use technology in artful, inspiring and meaningful ways,” says Adam Joseph, Executive Producer and Co-Founder of LEGS. “Lexus Design Disrupted is our testament to that philosophy.”