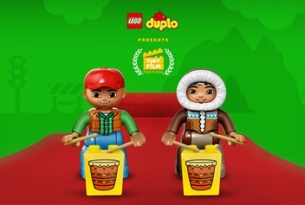 Lego Duplo is launching its second annual Tiny Film Festival, an online film festival designed to celebrate and recreate the imaginative stories of young children.  Parents are invited to submit their little ones’ stories on the Lego Duplo Facebook page for the chance for it to be turned into a tiny film.

Lego Duplo, in collaboration with Disney, will select one story per week to be made into a 15-second stop-motion animation featuring Lego Duplo bricks and sets. The child’s film will be celebrated across social platforms and digital platforms and credits given to the tiny script writer.

Although the films are tiny, the campaign partnership is not as it brings together two of the most popular companies in the toy industry, LEGO and Disney. Intended to encourage parents to spend time imagining and building with their children, the films promise to delight people of all ages. A premiere cinema event is planned to celebrate the winners.

The campaign was created by a collaborative team across the Dentsu Aegis Network including Carat, Isobar, Amplifi and iProspect. The bespoke team have been responsible for the strategy, creative development and media partnerships with Disney to create this engaging 360-degree campaign.

The Tiny Film Festival was announced first via a sneak preview post on the Lego Duplo Facebook page on 8 April and the supporting media campaign begins this week. The competition closes on 1st May.