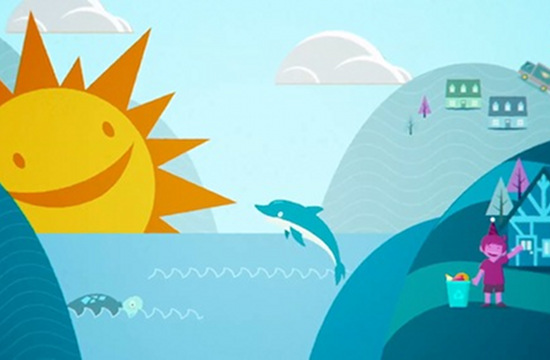 Looking to shed light on the disastrous effects plastics are having on the world’s oceans, the international environmental advocacy non-profit group Natural Resources Defense Council (NRDC) turned to leftchannel – the motion design studio led by Executive Creative Director and President Alberto Scirocco. Leftchannel was challenged to craft an entertaining yet informative public service announcement that would be a call to action for viewers to “reduce, reuse and recycle” plastic packaging.

“The skills leftchannel brought to this project are valuable for translating a complex issue like this, to visually show this system and how we can make positive changes,” Leila Monroe, a Staff Attorney with the NDRC Oceans Program, says.

After the organization approached leftchannel to translate the complex issue of plastic pollution to a visual platform with a positive message, Scirocco and leftchannel’s creative team (which included designer/animators Taehee Lee and Nick Schoener) set to creating a concept and script that avoided the usually negative tone found in most environmental PSAs. Rather, they harnessed the studio’s abilities to marry 2D and 3D character animation with motion design to inform viewers in a positive way.

“Our goal was to remind people how important this issue is, without giving the impression that they were being criticized or that we were trying to scare them,” Scirocco says. “Americans have been recycling plastics for a long time, but the current recycling programs aren’t working anymore and NDRC wanted a new approach – one that informs and entertains in a constructive manner.”

That new approach can be seen in the PSA entitled “The Great Plastic Purge” -- a two-minute animated piece that was inspired by after school specials from the 1950s. The character animation style keeps the tone light, which helps engage the audience, while expressing important facts in a way that is never boring.

The PSA opens with a shot of a young boy happily ripping open a birthday present that’s wrapped in numerous layers of plastic, all of which he cheerfully throws away. From there the piece follows the packaging from the boy’s home to the ocean floor, while a chipper voiceover informs about how Americans waste $8 billion a year due to plastics making it into the nation’s waterways.

This project presented several challenges. According to Schoener, from a story telling perspective, effectively illustrating why the system was broken was challenging. “We had to first understand it ourselves,” he says, “then communicate it in a way viewers could easily connect with and understand.”

For Lee, the most challenging scene to animate was the underwater scene. “It was complex because it contained a lot of different 2D animated trash objects that all needed to be integrated carefully into the scene. Because the scene connects to a 3D scene afterwards, the integration of the two was tricky -- both 2D and 3D had to look consistent,” Lee says.

Scirocco says, “It was a challenge to take a bleak story and turn it into an optimistic one. Overall, the animation needed to address three main points in a memorable, engaging manner: bring awareness to the issue; suggest that manufacturers be held responsible for coming up with innovative packaging solutions; and get consumers to take action to reduce, reuse and recycle.”