Leftchannel Conjures a Foodie Winter Wonderland for ABC's 'The Chew' 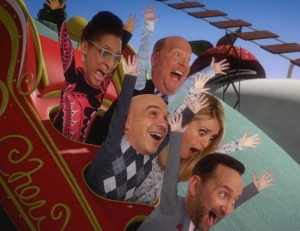 Animation/design studio leftchannel perfectly captures the holiday spirit in a new 60 second promo for ABC-TV’s daytime cooking/lifestyle show The Chew. Seamlessly blending live action, still photography, CG animation and motion graphics, the piece follows the cast through a breathtaking holiday thrill ride through this culinary wonderland being prepared around them.

“This was a collaborative effort between ABC and us,” Alberto Scirocco, leftchannel’s Creative Director says. “They came to us with a rollercoaster ride idea that incorporated photos of the cast. We took that concept and ran with it. We wanted to make this something that would stand out from traditional holiday TV fare, emphasizing character animation and a CG world that felt both unique and familiar.”

Inspired in part by the classic Rankin/Bass stop-motion animated classics like “Rudolph the Red Nosed Reindeer” and “Santa Claus Is Coming To Town,” The Chew promo, entitled “Enjoy The Ride,” uses a combination of production techniques -- from traditional live action and still photography to 2D/3D animation, extensive rotoscoping and motion graphics to craft something that feels truly magical.

“We had such a great time working with ABC to bring this crazy little adventure to life,” Andy Taylor, leftchannel Producer says, “we’re thrilled with how it came out and how it captures all the fun of the holidays.”