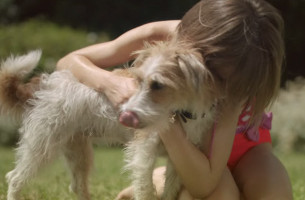 The TV campaign, which will run in the US, UK, France and Germany, is a tale of two halves that make a whole story, showing how only HomeAway can offer a truly ‘whole holiday’. They’re designed to play at opposite ends of TV ad breaks.

It’s a story about a friendship between a little girl and her pet dog, which she has to leave behind when the family goes on holiday. The clever little dog however manages to escape and follows his friend all the way to the family's holiday rental.