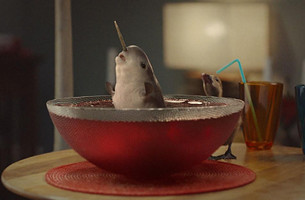 Today sees the UK welcome a new cast of festive SweeetTM characters to its screens, as McVitie’s debuts its first Christmas advertisement in over 30 years, featuring its family favourite, the McVitie’s Victoria biscuit selection.

With 11 brand new stars, from a cuddly puppy to a loveable piglet, the £1 million 60 second advertisement will premiere on 4th December at 7:42pm on E4 and will run across high-profile programming during the three week period leading up to Christmas Day.  The advertisement, created by Grey London, is the latest addition to the McVitie’s Sweeet™ advertising campaign which launched in February 2014 and has seen a total investment of £12 million in a bid to modernise and drive fame for the brand.

As a Christmas surprise for the nation, the much loved McVitie’s Sweeet™ family of Digestive puppies, Chocolate Digestive kittens, Jaffa Cake tarsier and BN owl has been expanded with a host of adorable additions. These new additions build on the previous cuddles and snuggles, and have been cast to reflect the feeling that we get when we open a box of McVitie’s Victoria, a delicious selection of biscuits in milk, white and dark chocolate. This is all captured in the end line; “Victoria, the Chocolatey Cheer of McVitie’s”.

The advertisement opens with a sleepy family relaxing in front of the television at Christmas. However, excitement ensues when dad suggests opening a box of McVitie’s Victoria biscuits, as he reveals a host of adorable animals appearing from the pack; an Alaskan Malamute puppy, a micro piglet, a Persian kitten, a rabbit, a duckling, a ginger kitten, a Pug, a hedgehog and a reindeer. There is even a narwhal hiding in the Christmas punchbowl.

As each animal appears it joins in a Christmassy rendition of Yazoo’s classic 80s hit, Only You. The whole family is surprised and delighted in equal measure as the SweeetTM choir regales them with its tune – granddad is even woken up from his Christmas nap with a cuddle from the Malamute puppy.

The launch of the latest McVitie’s advertisement marks the end of a monumental year for the business, which saw its value share of the total biscuit market rise to 26% in September 2014 - more than three times the size of its nearest competitor.

UB Sweet Biscuits Marketing Director, Sarah Heynen said: “The launch of McVitie’s Victoria on to our TV screens this Christmas marks another momentous occasion for McVitie’s at the end of what has been a highly successful year for us.

“We’re delighted to introduce the latest additions to our McVitie’s Sweeet family, and hope that it brings chocolatey cheer to biscuit loving households across the UK for the festive season.”

With the premium assortments market worth over £63m in the UK, this latest investment by United Biscuits marks an ongoing commitment by the business to continue to grow the sweet biscuits category and support Christmas retail sales. United Biscuits, the UK’s number one biscuit baker, sold over three million units of Victoria in 2013, making it the nation’s favourite sweet biscuit assortment.