Leading Artists Give the Rolls-Royce Ghost a Fantastic New Look 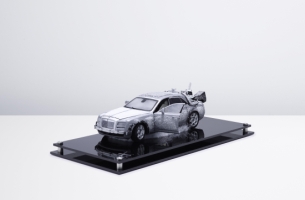 Twelve leading artists have created unique artworks, each featuring a 1:18 scale replica of the iconic Rolls-Royce Ghost, for a one-of-a-kind collection.

These spectacular artworks, donated by some of the biggest names in contemporary art, will be on show from 20-25 May 2015 at Rolls-Royce Motor Cars London in Berkeley Square to raise valuable funds for Breast Cancer Care.

London artist Charming Baker, known for his emotionally charged work, explains the thinking behind his artwork, ‘One in Eight’. “It is important to me that the work I produce for this brief is relevant to the subject matter we’re dealing with. One in eight women in the UK will be diagnosed with breast cancer in their lifetime. So I have set the car in a clear block of resin, suspended in the middle of the block – floating, pristine. The block has been drilled 16 times, in a very orderly and simple grid pattern. Fourteen drill holes pass through the clear set resin only, two pass through the resin and the model car. It is a sculptural piece which looks very simple, but with an underlying reference to the huge numbers of people who are touched by breast cancer in the UK each year.”

Richard Carter, Director of Communications, Rolls-Royce Motor Cars commented, “This revered group of contemporary artists use Rolls-Royce Ghost models to create thought provoking works, all of which will be auctioned to raise funds for Breast Cancer Care.  This has been an exhilarating collaboration which promises to raise valuable funds for a very worthy cause.”