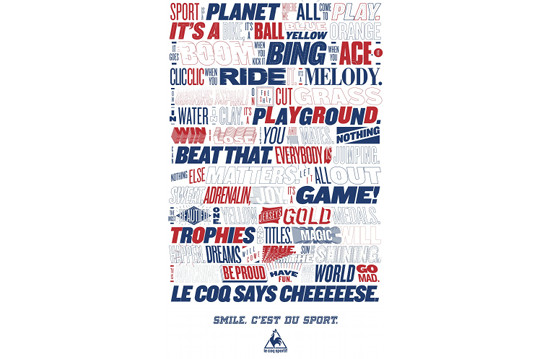 ‘Smile, c’est du Sport’ celebrates the pleasure of sharing in the great emotions of living and breathing sports performance. The central creative idea reaches back to the roots of Le Coq brand and captures moments that make sports news.

Co-founder of creative agency “Peoplewelike”, Ryan Lietaer (Canada) said: "We needed to find the authentic source of this brand’s identity and its true voice so that it could return to sport in an authentic and unique way.”

Co-founder Ghislain de Villoutreys (France) continued: “There are other players who may be bigger, but none will have Le Coq’s unique and passionate point of view – that sport must first be a source of pleasure, driven by the emotion and adrenaline of performance.” 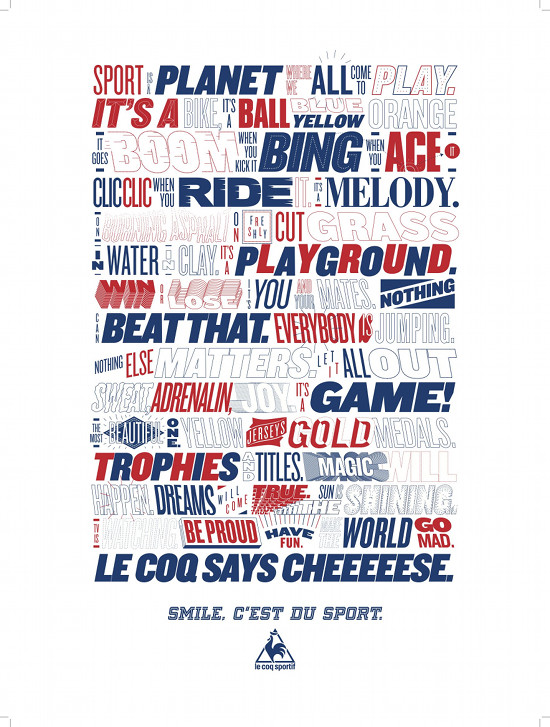 "We wanted to express our strong and clear way back into high performance sport”, says Cyril du Cluzeau, International Marketing Director Le Coq Sportif. “Le Coq Sportif is now reborn into what we have always been – a sports brand. This is our inspiration for the future. We also wanted to show our vision that sports must firstly be a source of satisfaction, involving emotion and adrenaline.”

Le Coq was bought in 2005 by the Swiss investment fund Airesis. After the acquisition the brand chose to change its strategy and focus on the French know-how, to offer products that enhance brand values. In 2010, Le Coq Sportif inaugurated its new R & D centre in Romilly-sur-Seine, the birthplace of the brand. In 2012, the brand opened a workshop space in the same location. Since the 2005 investment the company has grown immensely, from 25 employees in 2006 to more than 280 employees today. Total turnover has been multiplied by four, from 25 million euros to 118,900,000 euros at the end of 2012.

The creative campaign launches on 1 April simultaneously in France, Spain, Italy and the UK, across digital film, outdoor, print, and in-store as well as across all partners of Le Coq. It will air until July, leading fans to the final of Le Tour de France. Le Coq Sportif brand is the official sponsor of the yellow jersey worn by the winner of the annual race.

Track: Say What by Huw Williams