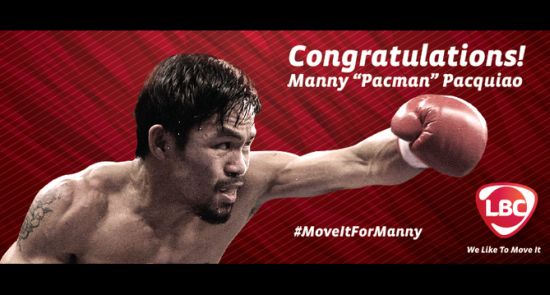 The campaign titled Move it for Manny, developed by Arena Philippines, was launched on 3rd April and ended on 13th April to coincide with the final match of the championship. The brand kicked off the initiative by urging the boxer’s fans to upload their photos with a raised left fist and hashtag it #MoveItForManny to demonstrate their solidarity with the “People’s Champ”.

Days before the match on 13th April, LBC sent custom-made boxing wraps to Pacquiao consolidating the names of people who lend support to him. To ensure that match gets maximum audience, LBC provided free live-screening venues in ten locations around the Philippines on the day of the match.

The campaign reinforced LBC’s position as a company that has been boosting Pinoy pride by offering unwavering support to national icons like Manny Pacquiao.

Commenting on the campaign, Lawin Bulatao, Executive Creative Director of Arena, said: “LBC wants to be there for what the Philippines’ is experiencing – whether it be a tragedy or a victory. For several years, LBC has been moving money and cargo for Filipinos, now it’s time that we move Manny.”