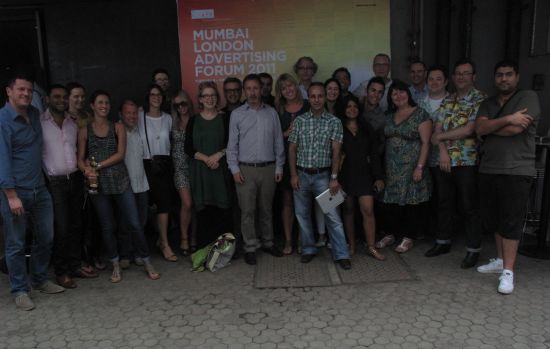 LBB: So you’ve jumped on a plane and headed to Mumbai leaving the rest of the LBB team in freezing London. Tell us about what you and the APA are up to in India’s most creative city?
MC: Basically we are here to meet and greet the advertising and production community to find out if the UK talent (directors and post companies) could work more closely with the Mumbai market. It’s a fascinating event and we have met most of the top creatives in the city. We have listened to them talk about the market at a conference style event and learned an awful lot about the market. It is a fascinating market and there is most definitely the feeling that UK post and production companies can work with the local agencies, but it is KEY that the game is played right.

LBB: British High Commissioner Peter Beckingham hosted the week’s opening reception on Monday night. We gather that three of Mumbai’s biggest Bollywood Directors were there. Any highlights from the night you can share?
MC: It was a great night with great company! As well as meeting some iconic Bollywood directors we also got to meet amazing actors and actresses and even Malaika Arora Khan an “item number” from Bollywood films! You need to google what that means if you don’t!!

LBB: Bang Bang Film’s Roopak Saluja presented on Tuesday; discussing India work culture and traits. Any tips and points worth mentioning to us here at LBB?
MC: Wow, where do I start? There is so much to learn about the market. It’s interesting that most presenters mentioned that even Indians don’t really understand India! So we may struggle. There are 1.2 billion people in India and that makes up nearly 20 percent of the world’s population. Add to those 22 official languages and about 4000 (unofficial) dialects. It’s a fantastic, crazy, chaotic place that just doesn’t work like we would in the west. I’m not saying that in a negative way, everything gets done, just differently.

From what I have learned so far my best bit of advice to anyone wanting to work here is that you have got to be serious about it and you need to come often. The Indians are very tactile, passionate and emotional. They will want to get to know you and will expect to see you and to see a job through. A director here tends to work on the job until it’s finished and not just up to post point.

I think the other thing to remember is that you need to understand what locals like. It’s a colourful, vibrant country and that is what Indians like to see. Think Bollywood. There is no point coming here and trying to make a saturated look ad, it’s simply not their aesthetic. It really is worth studying some of the work made here. It’s amazing but most of it would only show in India.

LBB: Knucklehead’s Tim Katz spoke at the conference about the expertise and talents that London can offer to India.  Can you explain any of the merits that were discussed?
MC: I think that it’s quite clear that UK post and production companies can work in the Mumbai market. Interestingly, most presentations included the fantastic Nike Cricket ‘’Traffic’’ spot which was posted in London. Tim showed the Indian market what can be produced at what price through London production companies. I have also spent some time finding out about budgets in Mumbai and whilst it is clear that most commercials in Mumbai are produced at a lower cost than those in the UK, there is a fair amount of work that the UK can compete on. The UK market, particularly, has had to get used to working with cost consultants (millions of them) and have therefore learnt to work in a flexible/cost effective way. Time frames are much tighter in Mumbai, but Tim and others believe that we have the production experience to make that work.

LBB: Matt, can you name drop who you’ve met in the Indian ad world?
MC: I’ve had a chance to catch up with lots of old friends, and meet some fabulous new people too. I met Pops (K.V Sridhar), Creative Director at Leo Burnet - a bit of a local legend. Bobby Pawar from Mudra and many other top, top people. I also got to talk with Sajan raj Kurup, founder and creative chairman of Creativeland - a truly inspiring man with a truly inspiring agency. If you don’t know their work, check it out. It’s amazing and they are soon to open in London!!

LBB: This is the first year for Mumbai London Advertising Forum. What’s the general buzz around the week? Are people seeing merit in attending? Do you think there will be a MLAF 2012?
MC: The event was great, with everyone wanting to learn more and make some new contacts. The general buzz was that it is clear that the UK can work with The Indian market. I believe that the UK probably has the most exportable talent in the world. I don’t say that because I am a Brit, but because we are pretty easy going and have had to learn how to collaborate better than most (in our business). I have travelled to a lot of major cities and I have never seen anything like Soho. Whilst it’s fiercely competitive (approx. 40 post houses and 100 prodcos) we have learnt to share and collaborate on work because we are all within one square mile. We also hang out together. It’s a bit like an extended family, even this trip is a bit like being with your family! So we have amazing talent and do collaborate and listen well. That is why I believe UK companies will work well in India (but guys: hissy fits don’t work here!!). I’m not sure if there will be another one here in 2012, but there should be. Steve and Nicki from the APA have done and incredible job of organising this event (with the help of the brilliant Tanu from Bang Bang Films) and I think it should come back even bigger and better. The clear message has been that we need to come back and grow a relationship, which I know works!

LBB: The week has been jam packed with events and key speakers. Who have you found to be the most inspiring and can you explain why?
MC: I think it would be rude of me to pick a fave as they have all been inspiring, but I did find Raj from Creativeland totally inspiring. His company is amazing and he seems to sell great creative ideas to his clients. I’m looking forward to finding out a lot more about the company and would suggest you do, too! I found him inspiring for two reasons really, one because he showed us some amazing work; work so good that the Cannes Lions had to fiddle with the entry rules after seeing some of his work. And, two, because of his message, which was basically that really good work works anywhere, and I think he is right. I think whilst much of the world is talking about creating a ‘’different’’ agency model, Raj and his team have actually done it

LBB: Steve Davies and APA delegates rounded up the event with a forum. Can you give us a quick synopsis on their thoughts and how they think they can strengthen working relationships?
MC: I think this was really a case of showing the Indian market what the UK market can offer, and that is a very, very polished product. I think all the companies who came had something very obvious to offer – Framestore, Rushes, Compendium, Passion Pictures, MPC, Kucklehead, etc. I think the “winners” will be the ones who spend the most time following up with their Mumbai contacts and who make a return visit.

LBB: This isn’t your first trip to Mumbai. Tell us what it is about the city that inspires you and why people should take the time to visit?
MC: It’s not my first time and it certainly won’t be my last. I love it in Mumbai! The people, the passion, the chaos…it’s an incredible place with amazing smells and sights. It is so alive - I can’t see how you couldn’t be inspired by it. The people are just amazing. I think on this trip I have realized that one of the greatest things about Mumbai is that it just works. People don’t waste time planning a thing to within an inch of its life, or waste a lot of time having meetings about meetings, or worrying something to death. They just get on with it, without all the bullshit.
People just need to come here. It isn’t something that you should spend too much time thinking and worrying about. Just make the contacts and book the flight.

LBB: What’s been the highlight of your week? Besides meeting one of Bollywood’s most famous female dancers…
MC: Seeing some great work, seeing some old friends, making some new ones and learning more about the market. I feel there is so much going on here and things are constantly evolving. In my opinion it is the market to be focusing on if you want international growth.

LBB: Lastly, but not leastly… In three words describe your week
Exciting, emotional and jam packed with traffic – I think that just about sums Mumbai up