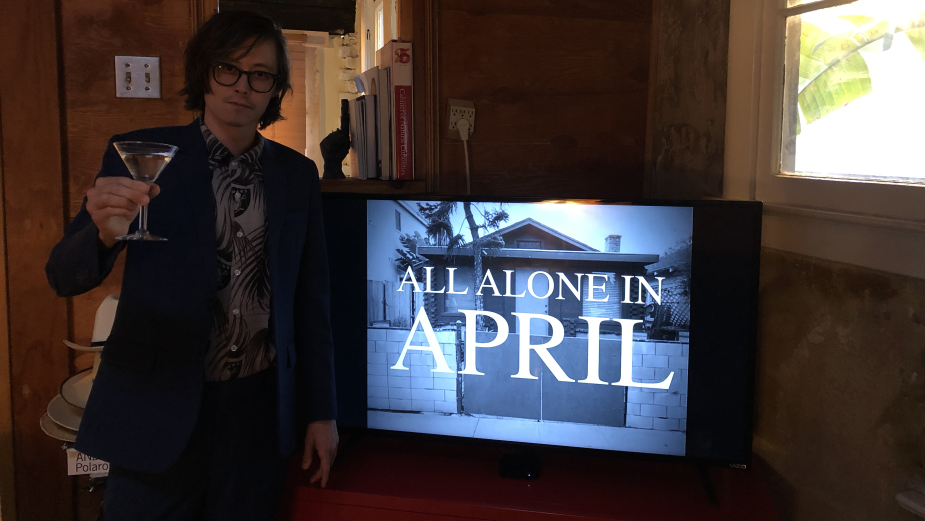 Ace Norton, a director repped by JOJX in the US and Spy Films in Canada, was in Hamburg when the United States closed its borders in response to the spread of coronavirus. He was worried he wouldn't be able to make it back to his home in LA and, in his words, was in his hotel room all alone, "mind whirling, getting very emo, listening to lots of old Italian music and opera".

Thankfully, he made it back to the US. After landing, he was inspired to write a short story. 'All Alone in April' was set in the near future and about a lonely widow stuck in her house who falls in love with the deliveryman, as the apocalypse happens outside her window.

The short story has now been re-adapted for the screen as Ace has released 'Alone in April', a short film he made while in quarantine, which he describes as 'The Shape of Water' meets '28 Days Later' meets 'La Jetee'. He did pretty much everything for the project: wrote, directed, acted, production design, special effects makeup, camera operation. He bought all props and camera equipment from Amazon and then shot the film over a few weeks, shooting a little bit each day. His main help was from his girlfriend, who he lives with and starred in the film.

Once you've done that, learn more about how and why Ace brought this film to life in his interview with LBB's Addison Capper below.

LBB> Tell me about the narrative! It's inspired by a short story you wrote. What's the story about and what inspired it?

Ace> When the lockdown happened, I was in Hamburg, Germany on a shoot. The day I arrived, the president shut down all the borders to the United States, and I thought I was going to be stuck alone in Hamburg for the next six months…

So I was in my hotel room all alone, my mind whirling, getting very emo, listening to lots of old Italian music and opera. There was a hospital across the street from the hotel and I would watch emergency helicopters fly in sick COVID patients in and out, all day long… there was so much uncertainty at the time and it was unnerving. Like I was watching the apocalypse live happening, play-by-play, outside my window.

I think the whole idea spurred from that experience and as soon as I got back to the States, I wrote a short story, ‘All Alone in April’, about a lonely widow stuck in her house who falls in love with the delivery man, as the apocalypse happens outside her window. In that Hamburg hotel room, I was that lonely widow in a way…

LBB> When did you decide to turn it into a film? And why?

Ace> When I was a kid, I would make these little films after school which I would direct, star in, and shoot completely by myself. I thought about that experience, and how I sorta lost that drive in a way, as I grew older and went on to bigger projects, spoiled by big commercial crews, or telling myself I couldn’t do certain things because I didn’t have a fancy camera or because of budget. Just making excuses, really.

With the lockdown, I knew I had nothing but time on my hands, and I’ve always been a shooter. I need to be on set, shooting. It has always given me a sense of purpose: just moving and shooting and creating and doing, doing, doing is integral to who I am as a person. If I am not shooting, I get anxious and restless…

So I figured let’s go for it! The plan was: I was going to cast my girlfriend, whom I live with, to play the lead, and even though I can’t act worth shit, I was going to play the delivery guy, just like I would have done as a kid. I’d operate the camera, production design, light, do all the special FX makeup, choreograph, produce, direct… EVERYTHING. Everything was locked down, so I bought a few essential props on Amazon and had them delivered to my front door.

The whole aesthetic of the film was going to be a tip of the hat to old films I love - inspired by a mix of Fred Astaire, La Jetée, and the French New Wave - and I wanted to use the soundtrack I was listening to whilst cooped up getting emo in Hamburg, to be the driving force. Even if it turned out like shit, it was going to give me a sense of purpose, a reason to wake up every morning, and keep my mind occupied because “an idle mind is the devil's workshop”. That was the plan…

LBB> What about the proverbs? What was the inspiration behind each of them?

Ace> I originally wrote and shot the entire film without the proverbs. When I saw the first edit cut by the brilliant Micah Levin (which was also done remotely), it was lacking structure, the narrative just didn’t seem to move as well as I originally intended it to.

So, in a mad scramble to solve the issue, I sorta had this eureka moment! What if she finds ‘A Book of Proverbs’ at the very beginning while she is foraging for food, then I can use famous proverbs / sayings as a storytelling device throughout the film, like old titles in silent films…

So I took a day-and-half and rewrote the whole script, then I created the book cover on Photoshop, which was difficult because I suck at Photoshop. I shot pickups of Seyna as she finds the book in the vacant alleyway next to my house. Then I WeTransfered the footage to Micah the editor, and the result is what you see now. I think the proverbs absolutely saved the film.

LBB> What inspired the silent movie style of the film?

Ace> I originally shot the film with a little bit of dialogue, for safety, just in case the silent movie experiment didn’t work out. There were scenes with us talking as I arrived at the door, there was also a beautiful scene where Seyna speaks to herself in the reflection of the mirror whilst dining with herself. Seyna improvised the whole thing, ad-libbed everything and it was a beautiful, beautiful scene, but ultimately we had to let it go... 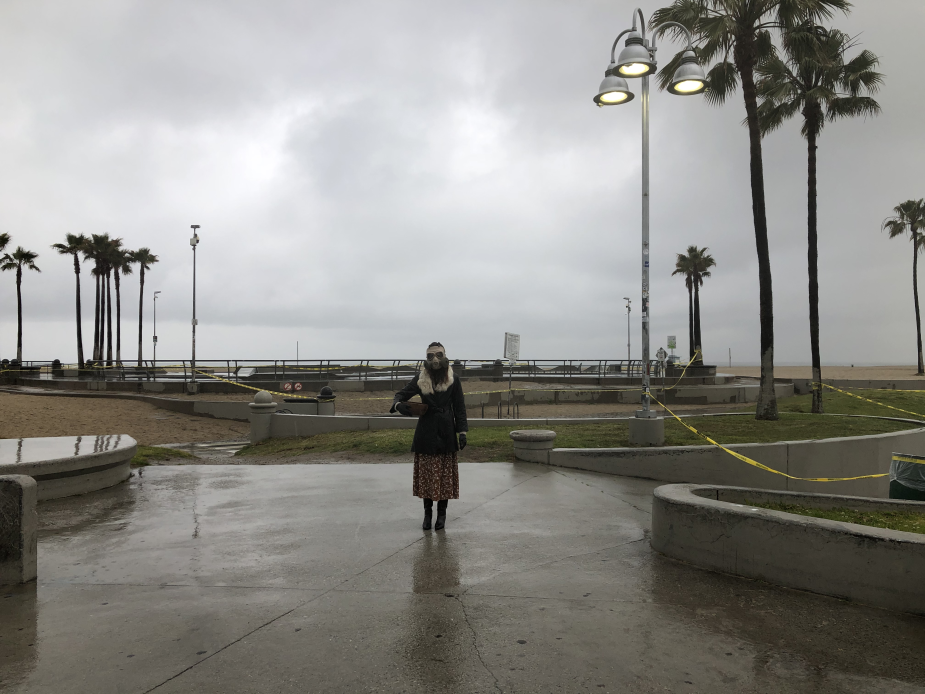 LBB> From a production standpoint, you sourced everything online and shot it with your phone - can you tell us a bit more about that and how you find the process?

Ace> Absolutely liberating. It just brought me back to film school days - no big crews, no big toys, just a great idea, willpower, an actor, a shitty camera, and a bucket of blood. Ha ha.

There were a few key props that we needed to source from Amazon - gas masks, a special effects makeup kit, fake blood, my delivery guy wardrobe, a gimbal for the iPhone, and surprisingly all of that was available on Amazon Prime even during the pandemic! So we bought all the necessary items and a week later it all showed up at my front door.

Yes I shot everything on my iPhone 8 plus. I didn’t want a crisp look - I wanted things to look vintage and old and imperfect - so I did a bit of research and bought the 8mm app and shot the entire film, black and white, using the 3x filter, which was great because it would hide a lot of the bad production value with having zero budget and an iPhone for a camera.

So I was in my hotel room all alone, my mind whirling, getting very emo, listening to lots of old Italian music and opera. There was a hospital across the street from the hotel and I would watch emergency helicopters fly in sick COVID patients in and out, all day long… there was so much uncertainty at the time and it was unnerving. Like I was watching the apocalypse live happening, play-by-play, outside my window.

LBB> There's so much emotion in the film, such as the scene with Seyna dancing with the football. How did you find the challenge of portraying that with no sound? How did that change the way you worked as a director?

Ace> I come from music videos and have directed so many - they are in a way like silent films, so the visual language of the silent film is very natural to me.

The soccer ball scene was something Seyna wanted to do. She wanted to do a scene where she danced in the living room with a soccer ball. We brainstormed about it a little bit more and I was like hey, ‘what if you put a gas mask on the soccer ball like it was like your lost lover, then you go in for the kiss but right before your lips touch, the soccer ball drops from the mask, making you realise you’re even lonelier than before!’ Holy shit! This was good. It was this kinda creative collaboration between us which made everything special, and made for the best scene in the film in my opinion.

LBB> How did you find the process of directing your partner?

Ace> Easy and difficult! Easy and great because there’s the freedom to experiment with no judgement. You don’t need to be ‘Mr Director on top of things' all of the time, or bring that sense of bravado you might have when you’re on a big set and you know all eyes are on you.

With this one I could be vulnerable. I could be unsure. Time wasn’t really an issue so I could be wishy washy. It was great! A real luxury you never have when the clock is ticking on a large set.

It was also difficult because we both are not afraid to tell each other how we feel, which obviously has its own set of problems. But we persevered, plugged away day after day, and got through it!

LBB> You said about the film, "It was quite possibly one of the difficult things I’ve ever done." Can you speak to why that is? Was it mentally or pragmatically difficult? Or both?

Ace> Yes pragmatically and logistically. I made all the props, while acting, directing, and while operating the camera at the same time. I only have two hands so that made it logistically difficult. All the stores were closed and on top of that my car conveniently broke down as well. On top of that Seyna was still working, so I could only shoot around her schedule which was only a couple of hours a day after her work. Literally all the chips were against us but we pulled it off somehow. 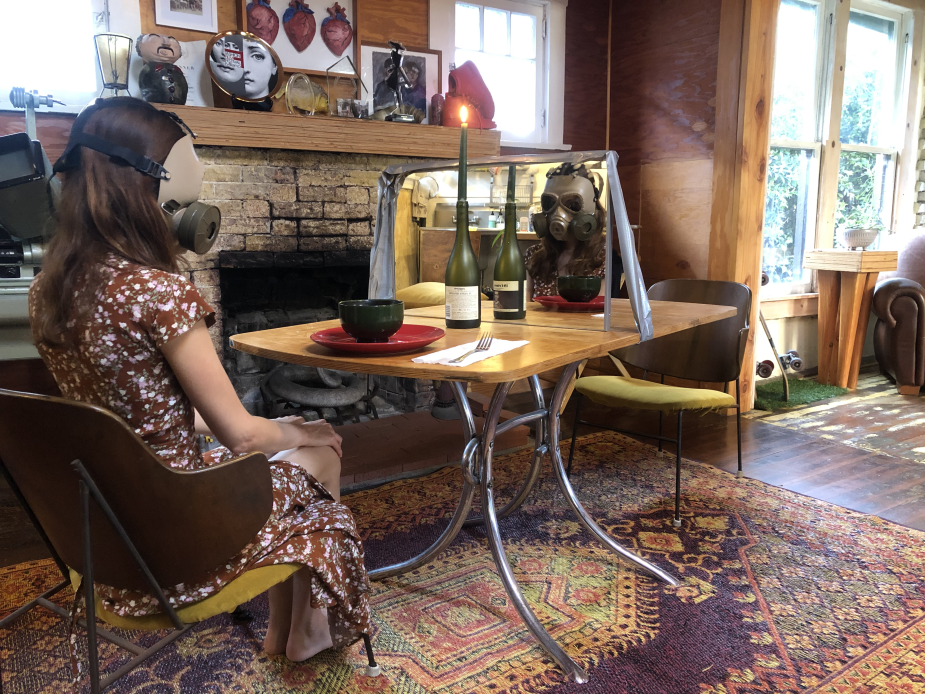 LBB> The ending isn't a particularly happy one - were you tempted to make them (yourselves) survive after taking their masks off? Why?

Ace. I love bad horror films - my grandfather showed me ‘Reanimator’ when I was nine - I grew up watching gory Samurai movies like ‘Shogun Assassin’, a favourite of my father’s. These genre movies are more of who I am and what I relate to than anything else. I’m not so much of a romantic person, so I was playing with the audience’s expectations the entire time - being as cute and romantic as I could possibly be, and then the ending comes and boom, let the real me come out with the gruesome gory, melting faces and all of that.

Ace> I did this whole thing more as a filmmaking experiment, an experiment of will, and as a way to keep me sane during these uncertain times. I learned a lot about myself along the way, and I think I’ll always look back at this time with great sorrow but also as a moment in time which gave me great hope.