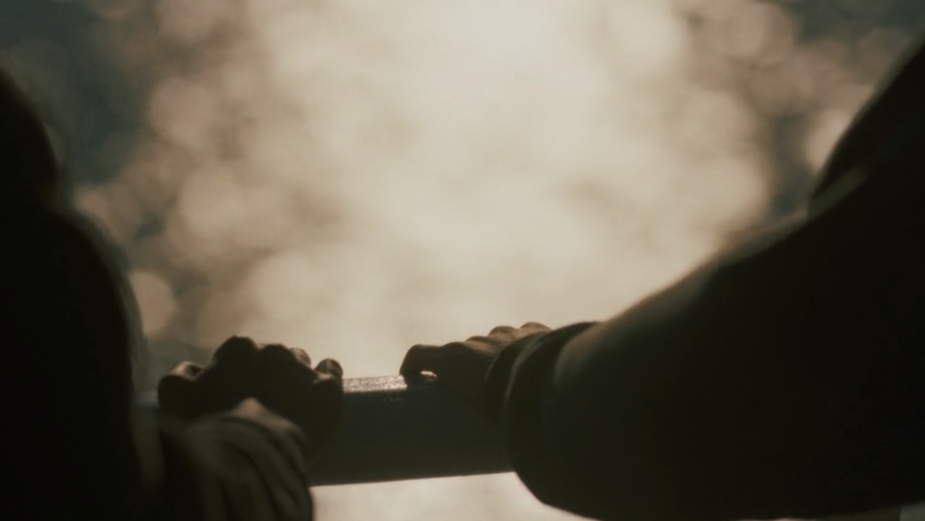 Who remembers high fives, handshakes and cuddles? Covid has deprived us of human touch and, with it, all the emotions - both obvious and subtle - that surround the various types of physical interactions between people.
Toronto-based director David Findlay misses physical connection as much as many of us whose lives have been curbed by the pandemic. And it’s this yearning for a return to contact that inspired him to write and direct his short film AIR. The piece focuses on the inventive substitutes people have been making for physical greetings that don’t rely on touch, exploring the emotions that these actions represent.
Moved by the film, LBB’s Alex Reeves asked David to tell us a bit more about the film.

LBB> Where did the idea for this film begin?

David> The idea originated from seeing the awkwardness of physical greetings now that we cannot touch over and over. The idea came together when I realised that people really emphasized, either with their body language or through their gaze, the meaning or nature of whichever greeting or physical action they were partaking in. For example, the reason for shaking hands at the end of a soccer game is to convey respect for your opponent, win or lose. But when we cannot touch the significance and the desire to transmit that sentiment is overemphasised in lieu of physical contact, and actually makes us reflect on the original meaning of such a custom in the first place. I thought that was beautiful and I felt inspired to share that observation.

LBB> What was the writing process like? How did you gather your thoughts into a script?

David> I started writing down small scenes and instances one by one honestly without initially knowing where I was going with them. Bit by bit I was gathering these odd, unnatural yet familiar instances and slowly the concept crystallized. I was very conscious of the progression of each scene from subtle to more discernible moments in order to generate intrigue and have the film work as a bit of a riddle for viewers to really engage with.

LBB> Can you tell us about how you ended up settling on the scenes you went with and why they were important?

David> Two or three scenes ended up on the cutting room floor and it was simply a matter of keeping the scenes that felt most human, nuanced and authentic.

LBB> How did you go about working out how you'd shoot it? The various waves and phases of Covid must have been complicating factors.

David> We went to Vancouver to shoot this because they had so few cases and we thought we’d be all set, while of course taking all the safety measures needed. The last thing we could have expected was for all the smoke from the California wildfires to come and cover the entire city the day before the shoot. So the night before we were ready to go, we pulled the plug, which was a total heartbreaker, but then we were able to reschedule the shoot three weeks later, which ended up being a blessing.

LBB> What were the big decisions you made in casting? It feels remarkably real. Maybe that's because we can all relate to this concept so much!

David> Thanks! When I shoot in Vancouver I work with a small boutique casting agency called Vaka. They just have the best taste for interesting but grounded looks, but then it’s always a matter of seeing how good an actor they are and if they have chemistry with their scene partners, which was challenging to all do remotely. The key here was getting on long calls with every single actor to discuss the idea of the film and how they personally could relate, from there we had a common vocabulary to utilise once working together on set.

LBB> What was the most challenging part of the whole process? And how did you deal with that?

David> Directing actors is so much about how you communicate. Almost just as much as what it is you say. So directing with a mask and having someone on set always telling you you can’t get too close to the talent complicates things. It’s just a matter of having patience and perhaps having these conversations removed from the busyness of the set.

LBB> Are there any subtle moments or parts of the film that you're particularly happy with and hope people notice? Maybe something to encourage people to give it a second watch?

David> I’m super proud of the film overall. I’d say I’m particularly happy with the close-up of the young soccer player. I think his performance communicates exactly the emotions I wanted to convey with the film. The final scene as well. The performance of the young couple is so nuanced and loving, it warms my heart every time. Lastly, getting to direct a pro skater like Spencer Hamilton and play real-life Tony Hawk’s Pro Skater with him was a treat.

David> The only thing I’d add is that this was such a labour of love for many people who poured in so much time and energy in exchange of very little —  all because they connected with the concept and felt it was worthwhile sharing. Some of these people are producer Joaquin Cardoner, DP Farhad Ghaderi and co-producer Neel Gupta.
view more - LBB Film Club