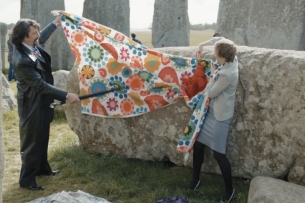 Camelot has revealed details of the third celeb to feature in its new Lotto campaign, which features a number of high-profile celebrities in a series of tongue-in-cheek mini-films, presenting outlandish dream projects they are hoping to finance with a big Lotto win.

The campaign initially launched with Piers Morgan in early July, followed by an ad starring Katie Price, which hit TV screens last Sunday. And today, Laurence Llewelyn-Bowen is revealed to be the third mystery celebrity that Lotto is asking the nation to help ensure DOESN’T win big – his first TV ad will air this coming Sunday, 19 July. The campaign builds on Camelot’s ongoing strategic approach for promoting Lotto, bringing to life the magic of anticipation that comes with buying a Lotto ticket and the period before a draw – the time when everyone is equal and anyone can win.

Each ad plays humorously on the individual celeb’s public persona, and sees them very earnestly talking about themselves and their dreams for when they win Lotto. For Piers, it’s building a legacy for the nation with Piers’ Pier, while Katie has a vision for a 24 hour TV station where she stars in every show.  Laurence wants to apply his visionary interior design skills to Stonehenge, something he sees as a ‘blot’ on the British landscape.  It is clear that these dreams are really best kept as just that – dreams – and that while anyone can win with Lotto, please don’t let it be them!

Sally Cowdry, Camelot’s Marketing & Consumer Director, said: “Our new Lotto campaign really captures the British sense of humour in a playful and irreverent way – using celebs to have some fun with their extravagant dreams and to remind the nation that anyone can win. And that’s what Lotto is all about, a small outlay for a big dream.”

Piers Morgan, Katie Price and Laurence Llewelyn-Bowen will all be tweeting in character to tease their respective ads – and there is additional national press and local on-the-ground teaser activity taking place before each execution launches.

The campaign is integrated across all media channels, with POS, Online, Social, Print, OOH, Radio, and TV. It was created by AMV BBDO, while Camelot’s in-house Creative Services Team developed press, outdoor and digital executions. Media planning and buying was carried out by Vizeum.