Sugar and spice and all things nice 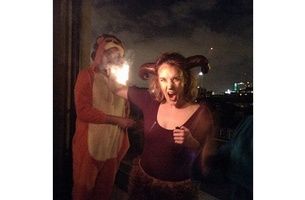 In the last few weeks the subject that’s been getting up everyone’s noses is the white stuff. It’s pure, powdery and irresistibly addictive. I’m talking, of course, about sugar (why, what else did you think I meant?) The debate about its effects on health and obesity is likely to infiltrate all parts of the industry. Food brands and retailers will have to decide between ploughing on as normal, re-appraising their sucrose, glucose and fructose-laden recipes, or mounting a communications counterstrike. Strategists and creatives will have to figure out how to deflect or deny. And for the rest of us, well it’s going to put a dampener on coffee-and-a-cake morning meetings.

According to the Harvard School of Public Health, the average American consumes a whopping 350 calories per day of ‘added sugar’ (i.e. not those occurring naturally in foods like milk and fruit but those added to processed food) when the recommended daily amount is 100 calories for women. For decades fat intake has been blamed for health problems like heart disease and weight gain, but now some experts think that sugar is at fault. Which is going to be a big issue for anyone working for confectionary brands. And cereal brands. And industrial bakers. And baked bean brands. And supermarkets.

Suspicions surrounding sugar’s role as the villain of the global obesity epidemic have been growing for some time, but up until now has been relatively ignorable. Throughout 2012 and 2013, anti-sugar voices were certainly growing louder, with books like endocrinologist Dr Robert Lustig’s book Fat Chance: The Hidden Truth About Sugar and John Yudkin’s Pure, White and Deadly: How Sugar Is Killing Us presenting the biochemstry for a lay audience. (Full disclosure: I read Lustig’s book about eight months ago and the evidence I’ve found there and elsewhere seems convincing, though I’m no expert and could very well be wrong.) But despite the TedX talks and the odd newspaper article, the demonization of sugar had not quite become a mainstream pursuit. Sugar-loaded ‘low fat’ foods and fruit juice (i.e. liquid fructose) continued to market themselves as ‘healthy’ with little push back from the consumer.

But – and I have a suspicion that this might be purely to do with a collective, post-Christmas chocolate hangover – the sugar debate has dominated the first few weeks of 2014. At the very end of December, the W.H.O. revealed that it is considering cutting the recommended sugar intake from 10 % of our daily calories to  5%, proving that this was no longer a fringe debate.  In the UK, both the BBC and Channel 4 have created well-publicised documentaries about the sweet stuff. The Action on Sugar Group, an organisation of medical experts, scientists and health policy researchers, grabbed headlines with the launch of a global campaign to put pressure on governments and the food industry. And, if that doesn’t prove that brands and advertising agencies need to engage, well, Marketing Week ran a fairly challenging cover story on it in their most recent issue.

But then… ‘engaging’ is easier said than done. Just look at the cringefest Coca-Cola unleashed when they weighed in on the obesity debate last year with their pro-calorie counting, pro-exercise campaign ‘Coming Together’. It’s tricky to be convincingly sincere about ‘moderation’ when you’re one of the world’s largest multi-nationals and your business thus far has thrived on selling as much pop as possible. Err… did someone say ‘disingenuous?’ No? How about ‘cognitive dissonance’?

Uni-directional, single message propaganda drive ain’t gonna cut it. We’re not stupid. Or, at least, we don’t like to feel like we’re stupid. Or, at least, we don’t like being made to feel like you think we’re stupid… And neither can brands pretend that the social revolution of the past decade didn’t happen. We’ve become more acclimatised to being able to talk to brands, we expect greater transparency. Plus (she said, naively), there’s also the question of morality. Brands have exploited the whole ‘ethical business’ platform so wholly over the past few years that if the medical establishment does side with the anti-sugar campaigners, these brands are going to find that platform increasingly shoogly.

So, depending how government policy and scientific consensus shifts, there’s going to be a strategic obstacle course to navigate. I suspect that there’s going to be conflict between brand clients and agencies too. For agencies it would be far easier to market a good news story of a company that’s completely overhauled its produce for the sake of its consumers health. For brands it may feel less disruptive to adopt a ‘business as usual’ approach while creatives and consultants distract the public with a more palatable spin on the truth. The end result is likely to be some sort of fudge. Sweet… delicious… fudge.

For now, although momentum is growing, there’s still a great deal of tension between interested parties and, despite the high profile coverage, no definitive consensus has been reached. The next few months are going to be interesting – how will the big multinationals react? What will that mean for ad agencies and the kind of content they’ll need to create? Lots of questions to chew on, though for now I’m going to have to sign off. Really craving a Mars Bar.