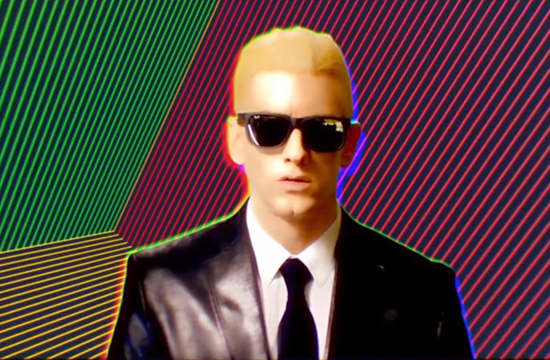 Laundry! and director Rich Lee have teamed up for Eminem’s latest video, Rap God. After numerous past collaborations including videos for Will I Am, Nicki Minaj, J-Lo and the Rolling Stones, Lee approached Laundry! to spearhead design and animation for the video accompanying the 6:00 epic.

Laundry! created a humorous, cartoon-like treatment inspired by Max Headroom, a popular animated character and TV personality from the 1980s, complementing both the frenetic edit and the rap star’s signature wit. To further enhance and sell this approach, Laundry! built and animated musically-driven line animations that serve as a nod to Headroom without dipping into over-nostalgia. The updated animations were designed to match the tempo of what could be considered the most technically impressive lyrical track of the year.

Laundry! strategically amplified the visuals to peak at the song’s climactic verse, Eminem’s rapid-fire technical display that finds the MC serving up 100 words in 16 seconds, represented visually when his brain explodes.

The project lands on the heels of a string of commercial projects for the company, including spot work for Farmers Insurance out of RPA, a book trailer created for Pereira & O’Dell CCO P.J. Pereira, and Intel’s groundbreaking interactive experience, The Power Inside.