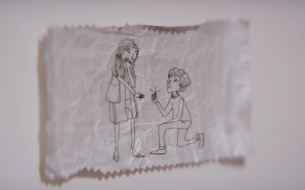 The newest two-minute film from BBDO is the latest installment in the wildly successful “Give Extra, get extra” campaign for Wrigley, which has helped drive double digit growth for the gum’s base business since launching in 2013, according to Nielsen data.

Like the first installment of the campaign, the new spot is focused on the idea that small moments of sharing can lead to something far more meaningful. There will also be 15 and 60 second spots that will debut on TV and online on October 19th.