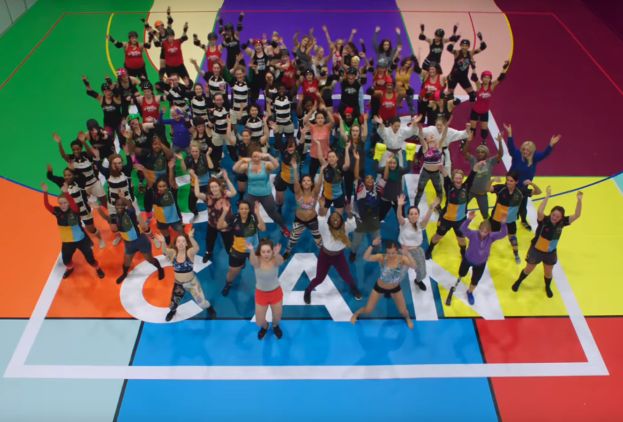 Staying true to its original formula of showing real women and girls playing sport and getting active, the ambition is still about overcoming judgement – but will also feature new messages to empower women, and a range of new and returning faces. The message is clear: it’s OK to sweat, it’s OK to jiggle, it’s OK not to be brilliant (or to be brilliant!) and it’s normal for life to get in the way sometimes.

This time around, the television advert is set to a new soundtrack blended with a narrative by iconic poet, Maya Angelou. ‘Phenomenal Women’ including 15-year-old trampolinist, Cerys McIntosh, and 69-year-old outdoor swimmer Sue Bairstow showcase their ways of keeping active to the words of the 1978 poem, published in Angelou’s third volume ‘And Still I Rise’.

Other personal stories brought to life include new mum Stephanie Outlaw, student kickboxer Fakhira Mohamad Hassan Mukhtar and blade-runner Debbie Squance from Plymouth, who all show the ways they overcome the worries that can hold women back.

A few familiar faces return too, with Alice (“I’m knackered”) and Grace (“Slow but I’m lapping everyone on the couch”) from the original ads appearing in this next phase.

Artwork from the campaign also includes personal lines from featured women– with phrases such as “Unleash Your Inner Beginner”  - or ‘’Take Me as I am or Watch Me As I Go’’. The mantras speak directly to fears discovered in research, and surrounding worries such as not being good enough, or overcoming stereotypes about what women should or shouldn’t do.

Powerful content in prime-time TV advertising, billboards and shopping centre screens will once again drive to the fore images of real women exercising on the national stage and use social media to start a debate about attitudes to female sport and activity.

Sport England CEO, Jennie Price, said: “This Girl Can has made a real difference since it launched, with the number of women doing regular physical activity and sport now at an all-time high. But there’s a lot more to do. Our research showed the dialogue many of us have in our heads about whether we look OK, whether we are good enough, whether we belong here doesn’t go away - we just learn to manage it. That’s why the reinforcement of seeing women who look like us playing sport and talking honestly about how they feel about it is so powerful.

“A new message this time is something women don’t usually hear:  it’s OK to take a break, to have a week off, to walk not run. No-one is saying this to us. Few magazines say it; sports brands don’t say it.

“Many of the women we’ve featured talk about stopping, then starting again. It can feel like the hardest thing in the world to return after a few weeks off, when you fear you’ve lost ground or fitness, but we want to surface this as a discussion point, to say it’s normal to take a break, but that needn’t stop you for good.’’

Al Young, Chief Creative Officer of FCB Inferno, said: “We were humbled and immensely proud of the success of the first campaign and of how its legacy lives on. This second brief presented us with a huge challenge, and this time round we have focused on the roller-coaster realities of the relationship with exercise – something that is rarely talked about. We are confident this will help even more girls and women manage their fear of judgement when getting active.”

Sharon Jiggins, Managing Director of FCB Inferno: “We wanted to move the campaign on to encourage even more women to get active. The Maya Angelou poem ‘Phenomenal Women’ has the power to do this. It is a celebration of women everywhere, creates a strong sense of belonging and inclusivity, whilst challenging stereotypes.”

This Girl Can is funded thanks to Lottery Players and Arabella Gilchrist, Head of Brand for The National Lottery, said: “We’re incredibly proud of our association with the This Girl Can and especially the impact it has had on British women over the past 12 months – to be able to say that funds raised by National Lottery players are enabling the next phase fills us with immense pride. Over the last 22 years, The National Lottery has had a transformative effect on people and communities throughout the UK – and in the same way, this fantastic new campaign will have a life-changing effect on women in every walk of life, in every nook and cranny of the nation. The results so far speak volumes and we look forward to seeing the stories unfold over the coming weeks.’’

For more about This Girl Can, go to thisgirlcan.co.uk where you can find out about the women in the campaign, get tips on how to get active and join the national debate or follow This Girl Can on Facebook or Twitter.