Celebrities star in the video with Engine, set for a TV roadblock to raise awareness of vaccine hesitancy 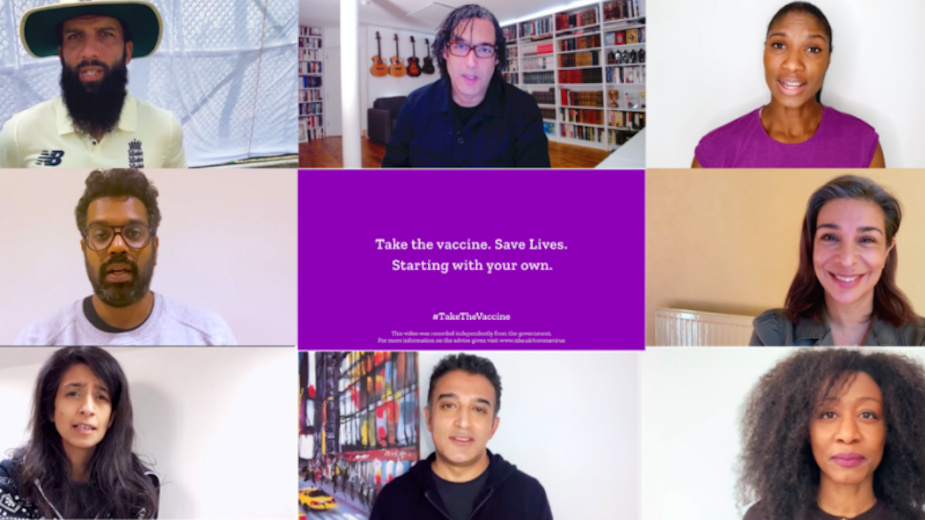 An independent video campaign urging ethnic minority communities to dispel myths and  take the Covid-19 vaccine is to air across all major UK broadcasters in an unprecedented TV moment taking place on Thursday 18th February at 9:56pm. The video, which features stars  addressing unique cultural challenges and concerns around the vaccine in minority  communities, will launch a campaign to encourage vaccine uptake. The simultaneous television broadcast and coming together of all the major commercial channels and the BBC will be a first in British media history.

Actor and broadcaster Adil Ray OBE, who has led the campaign said: “We are in unprecedented times and the fact remains this pandemic disproportionately effects people from ethnic minority communities. It’s heartening to see all the major broadcasters come together in an equally unprecedented television broadcast at this crucial time. An indication of how serious this situation is. We must all engage and encourage one another to do the right thing. The message is simple; take the vaccine, save lives.”

To amplify the message and support community efforts, the UK’s major broadcasters have come together unanimously for the first time to offer unprecedented coverage which will span the whole day on Thursday 18th February but peak with a simultaneous broadcast of the film on commercial channels at 9:56pm, reaching an estimated audience of over 10 million. While the BBC’s charter prevents it from taking part in campaigns the BBC is looking at the important issues raised by the campaign on the day it launches. The incredible show of unity amongst the channels underlines the importance of the message.

Carolyn McCall, CEO of ITV said: “Encouraging take up of the vaccine will save lives. That’s why ITV has worked with the other broadcasters to create a unique ‘roadblock’ simultaneous transmission so that this message is delivered to the most people at the same time.”

Alex Mahon, CEO of Channel 4 said: “Channel 4 has significant reach with diverse audiences across the UK and we’re delighted to be able to help get this important message far and wide at such a critical time.”

Stephen van Rooyen, CEO UK and Europe, Sky said: “Sky is proud to be part of the biggest roadblock in television history, to tackle one of the biggest challenges that we have ever faced and make a difference to so many lives.”

Simon Pitts, CEO of STV said: “It is so important that this independent message is heard by diverse communities in Scotland, and together with our broadcast partners across the UK we’re pleased to be using STV’s platform to tackle this vital challenge.”

The 3½ minute film will be shown at a special webinar addressing vaccine hesitancy in ethnic communities introduced by HRH The Prince of Wales and organised by the British Asian Trust on the morning of Thursday 18th February. The event will feature key speakers such as vaccine minister Nadhim Zahawi, Public Health England director Professor Kevin Fenton and Mayor of London Sadiq Khan.

In an excerpt from his video address HRH The Prince of Wales said: “It is clear that the virus has affected all parts of the country, and all sections of society – but it is also clear  that there are particular challenges faced in particular sections of our society, especially in some ethnic minority communities. What saddens me even further is to hear that those challenges are being made even worse by the variable uptake of the vaccines which finally offer us a way out of the suffering of the past year.”

In addition to the unprecedented television broadcast, the campaign will also feature in a large number of digital out of home media sites, in partnership with Clear Channel.

William Eccleshare, Worldwide CEO, Clear Channel Outdoor said: “Out of Home advertising provides the unique opportunity to publicly engage audiences with tailored messaging placed directly within targeted communities. As vaccine hesitancy is such a crucial issue to the UK’s recovery, we immediately offered our support to this important campaign.”

While the UK crosses the 15 million vaccination mark, a large percentage of ethnic minorities remain unlikely to take up the vaccine, causing concerns that a group who have been disproportionately impacted by the pandemic in both case numbers and deaths, will remain at risk of contracting Covid-19. This issue has led a host of stars to lend their voice to help curb community fears, support the safety of the vaccine and encourage uptake to save lives.