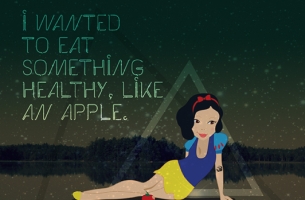 This week, lampada.ag is launching a web series on social networks about South by Southwest (SXSW). In a lighthearted way, the episodes presented by model Juliette Vecchi will share insider information about the event schedule, highlighting her own participation in the festival, new technologies and cultural agenda. Click here to view the webisodes.

Created in 1987, the festival has been drawing more and more attention in the advertising industry due to topic diversity and the possibility of getting to know several startups with innovative projects.

To launch the web series, the agency created the "Talk to me" campaign, which includes a series of three ads.  The assets provide reinterpretations of classic children's literature tales.  With that said, Red Riding Hood, Snow White and Cinderella get a refreshing young look inspired by the festival's audience.

In order to execute the web series, a team was put together to monitor, in real time, the topics related to South by Southwest.  The creative concept was to play with the idea that our team could help simplify the market.  The concept of the assets revolves around questioning the fact that had the famous characters of the children's classics watched the web series produced by the agency, the ending would've been different.  The campaign was created by Tito, with art design by Ligia Sequeira and creative direction by Zé Cardoso.