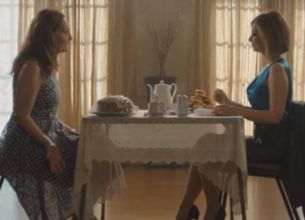 We’ve seen stalker stories with a crazed roommate, jilted lover, vengeful ex-con and even a super-fan entrapping their favourite author. But what happens when a timid housewife is jolted into a fight for survival—or her sanity—when her new weekly bridge partner whispers a threatening message in her ear. With something for both horror fans and casual Halloween suspense-seekers, 'The Bridge Partner' is now live online after an impressive 38-festival run around the world. The Hitchcock-ian 13-minute piece was selected as one of best horror shorts of 2016 by horror guru Kailey Marsh in her annual Bloodlist. It is written and directed by Gabriel Olson and has earned numerous accolades including the Wes Craven Horror Film Award at the Catalina Film Festival, Best Horror/Suspense Film at the COMIC-CON Int. Independent Film Festival, and the Audience Award at D.C. Shorts as well as playing seven Academy Award qualifying festivals.

“We usually don’t have the benefit of knowing who’s against us in life, so I found the psychological dance these ordinary characters engage in to be much more haunting than that of a typical slasher story.” says Olson. He went on to mention “Our villain is more of an agent of change, equally content to destroy or transform the protagonist.”  With gender representation in film being such a hot topic, this Bechdel test-passing thriller centres on two women in a fight for their lives whose conflict has nothing to do with a man.

Olson, who is repped for commercials by Durable Goods and Agile Entertainment theatrically, has extensive directing experience, including advertising spots for Coke Zero, Chevy and a spot for Guitar Center that aired during the SuperBowl and featured Questlove.