The brand’s residency is in Montreal for the coming season 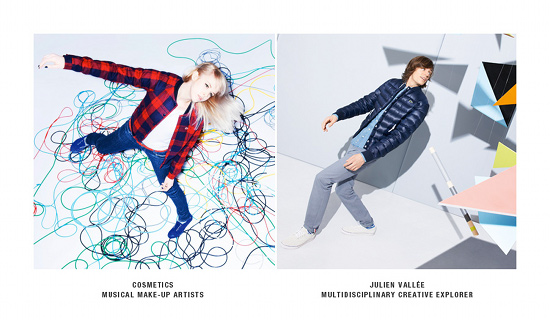 Lacoste has once again placed its trust in Nurun and BETC Luxe to roll out the 2012 Autumn/Winter campaign for the LACOSTE L!VE brand dedicated to digital natives.
2012 Autumn/Winter Collection
For the Autumn/Winter of 2012, Lacoste L!ve is once again presenting a highly graphic collection. In harmony with the city of Montreal, the brand’s residency for this season, the collection features parkas with leather trim, knit sweaters and colours from the North American landscape.
Creative Content and Co-Creation
After New York, where the brand had already discovered 3 young talents, LACOSTE L!VE takes us to Montreal to discover 2 artists who embody the brand’s values.
To respect the artists’ unique personalities, the young talents are presented in simple, off-the-wall scenes where their skills and character speak for themselves.
They were given free rein to create a work just for the campaign under LACOSTE L!VE patronage.
Julien Vallée, an eclectic designer, created an installation that is used as the backdrop for the BETC Luxe print campaign and for which the creative process can be followed in a special video available on the digital ecosystem designed by Nurun.
Cosmetics, an intimate duo of musicians, produced a piece called ‘Breathless’, which the brand is allowing people listen to for free in its SoundCloud space.
Andrea Spotorno, the leading fashion photographer of Italian origin, photographed Julien Vallée and Cosmetics.
Once again, the collaboration went further than the shoot, the making of videos and the site, since the system gives internet users a large amount of text content, photos, a paper magazine (created by Mr L’Agent) available in shops and a participatory city guide in cooperation with notorious Montreal bloggers - Mark of Hell’s Kitchen (http://www.hellskitchen.fr/) and Sophie of the Total Velours blog (http://www.totalvelours.com/).
This content strategy is backed up by the 10M videos viewed during the previous campaign, the hunger for regular content among the brand’s 600,000 Facebook fans and the average 2 minutes that internet users spend at the site.
The 'Unconventional Talents' campaign (co-created by Nurun and BETC) is based on the collaboration with these artists.
The Artists
Julien Vallée
Trained in Montreal and then Paris, exhibited in the United Kingdom, New York and Seoul, Julien Vallée is a young protean artist. An insatiable discoverer, his artistic experiments are the fruit of preparation using computer-generated images and concrete applications using tangible materials such as cardboard, mirrors, plastic and wood.
Inventing shapes, exploring materials, Julien Vallée shares the Unconventional Chic philosophy of the young brand with the red crocodile when he says, “If you’re not prepared to be wrong, it’s hard to come up with something original”.
Cosmetics
Nic and Aja are a mysterious couple who live and work together in their studio in Montréal, delving into their differences to create a stylised, synthetic sound tinted with fragility. Sleek and enigmatic, theirmusic irremediably evokes a slow, atmospheric crossing of Montréal. According to Nic, “Sometimes it’s better when it’s imperfect because... perfection is boring”.
Julien Vallée and Cosmetics, two talents embodying the brand’s values: urban, positive and approaching art in unexpected ways.