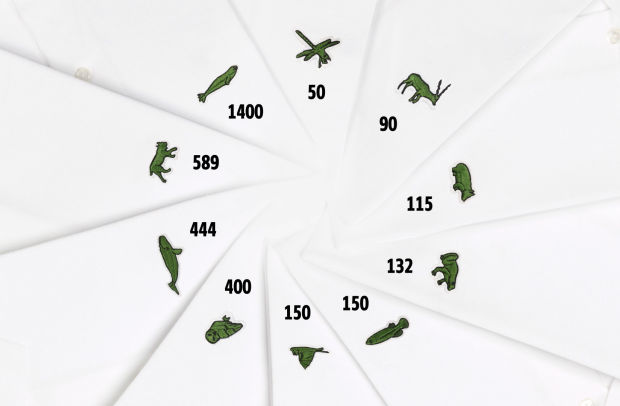 In 2018, Lacoste started a three-year partnership with the International Union for Conservation of Nature (IUCN) and joined forces to help raise awareness about the extinction of threatened species and support conservation action on the ground.
This collaboration led to the creation of 10 limited-edition polo shirts, with the iconic crocodile leaving its usual spot to 10 threatened species. For each one of them, the number of polo shirts produced matched the number of animals known to remain in the wild. All polos were sold out in 24 hours.
This year, the crocodile keeps on fighting for the survival of wildlife and will raise awareness on 10 other threatened species.
Tennis fans may have already noticed the Lacoste ambassador Novak Djokovic wearing a mysterious outfit during the ATP Masters 1000 in Rome on May 16, where the crocodile had been replaced by a seal…
On May 22, for the International Day for Biological Diversity, the crocodile will not only leave the polos, but every square foot of 10 key stores around the world.
During 24 hours, the 10 selected stores will become “crocodile-free” in order to each put the spotlight on one specific species. The polos for each species will only be available for sale in its dedicated store:
- Paris - Champs Elysée - The Iberian Lynx - 589 specimens left
- London – Covent Garden – The Yemeni Mouse-Tailed Bat - 150 specimens left
- Los Angeles - Rodeo Drive - The Opal Goodeid - 150 specimens left
- Tokyo - Ginza - The Northern Hairy-Nosed Wombat - 115 specimens left
- Miami - Lincoln Road - The Mountain Chicken - 132 specimens left
- Berlin - Kudamm - The Addax - 90 specimens left
- Shanghai - Shanghai Kerry - The Cebu Damselfly - 50 specimens left
- New-York City - Broadway - The North Atlantic Right Whale - 444 specimens left
- Seoul - Garosugil - The Moheli Scops Owl - 400 specimens left
- On Lacoste.com - The Hawaiian Monk Seal - 1 400 specimens left
3,520 polo shirts for 3,520 specimens.
All profits from this day from the nine stores and from Lacoste.com will help IUCN’s efforts to conserve threatened wildlife, representing a global commitment to face a global issue.
Lacoste would like to thank Lacoste partners JCDecaux One World, Metrobus and Branded Cities for offering Lacoste visibility for this project and the artist Rone who supported the project by offering his music “Bye Bye Macadam” for the digital assets.
view more - The Sustainability Channel